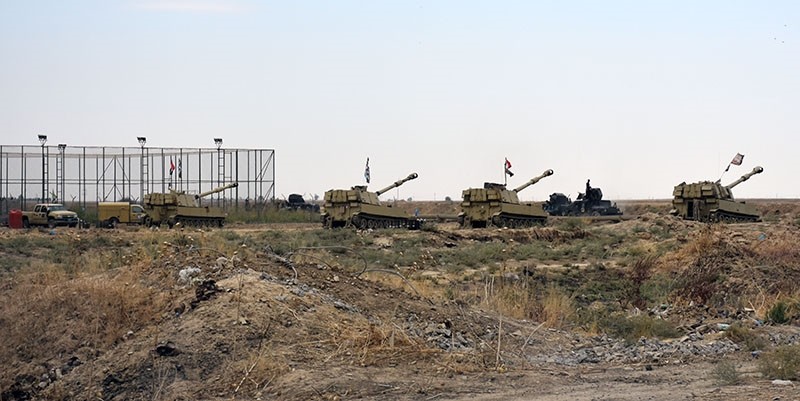 Iraqi army vehicles are seen parked near a former KRG military position on October 13, 2017 in the northern Iraqi town of Taza Khurmatu (a town near Tuz Khurmatu), near Iraq's oil-rich multi-ethnic province of Kirkuk. (AFP Photo)
by Anadolu Agency Oct 16, 2017 12:00 am

Iraqi forces on Monday seized full control of Tuz Khurmatu district, southeast of Kirkuk as part of a military operation in the oil-rich city of Kirkuk, according to a military officer.

Turkmen leader Niazi Oglu said the district is now under the full control of the government forces.

He said six government forces were killed and dozens injured in artillery shelling by Kurdish forces of the center of Tuz Khurmatu district.

The move comes amid tension between Baghdad and the Kurdish Regional Government after last month's illegitimate Kurdish independence referendum.

The Sept. 25 referendum has faced strong opposition from most regional and international actors -- including the U.S., Turkey, and Iran -- who warned that the poll would distract from Iraq's fight against terrorism and further destabilize the region.

The Iraqi parliament has approved a set of measures against the Kurdish region, including the deployment of federal forces in disputed areas, including Kirkuk.