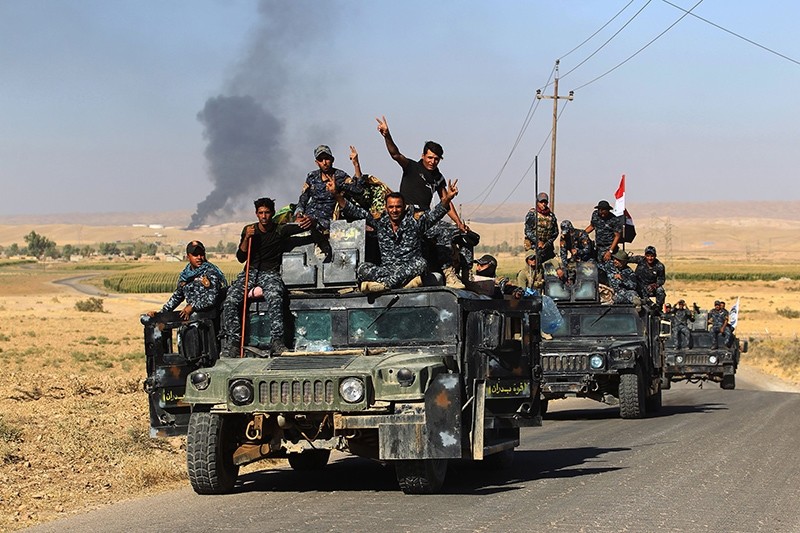 Iraqi government forces gesturing as they enter the Havana oil field, west of the multi-ethnic northern city of Kirkuk, Iraq, Oct. 17, 2017. (AFP Photo)
by Compiled from Wire Services Oct 18, 2017 12:00 am

Iraqi government forces said on Wednesday that they had achieved their objectives in a lightning 48-hour operation against peshmerga forces in disputed territory outside the autonomous Kurdistan Regional Government (KRG) region.

On Monday and Tuesday, Iraqi troops and allied militia retook the northern province of Kirkuk and its lucrative oil fields, as well as formerly KRG-held areas of Nineveh and Diyala provinces, in a punishing riposte to an illegitimate vote for independence last month.

"Security has been restored in sectors of Kirkuk. Forces have been redeployed and have retaken control of Khanaqin and Jalawla in Diyala province, as well as Makhmur, Bashiqa, Mosul dam, Sinjar and other areas in the Nineveh plains," the federal government's Joint Operations Command said.

The areas were evacuated by Kurdish peshmerga fighters before the arrival of the Iraqi forces on Tuesday, the statement said. The peshmerga had taken them over the past three years as part of the war against Daesh terrorists.

The Mosul Dam, northwest of the city, is among the positions retaken from the peshmerga, the military statement said.

Responding to the referendum, Prime Minister Haider al-Abadi ordered the retaking of Kirkuk on Monday, as well as all disputed areas claimed by both the KRG and the central authorities in Baghdad.