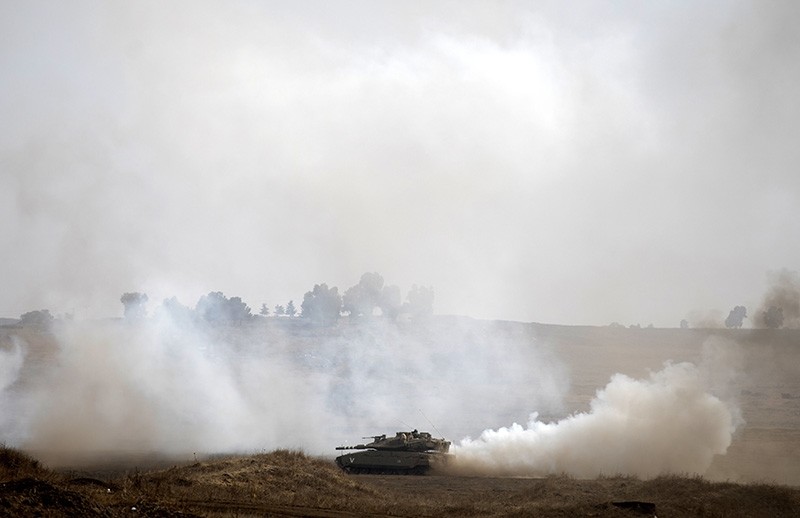 Israeli tanks train at the Golan Heights area, on the Israeli-Syrian border (EPA Photo)
by Daily Sabah with AA Oct 19, 2017 12:00 am

Israeli tanks reportedly hit a target in Syria Friday, in retaliation to a rocket strike from the Syrian side.

In a statement made by the Israeli army, a rocket fired from Syria hit the Golan Heights under Israeli occupation.

"In response, our tanks hit the rocket launch site at Golan Heights," said the statement, which reported no one was killed or injured from the attack.

On Monday, Israeli planes hit an anti-aircraft position near Syria's capital, Damascus. The Israeli army said the attack was in response to enemy fire from Syria during a "routine" flight over Lebanon.

Since Syria's civil war began in 2011, Israel has claimed Syria launched rockets into its territory from time to time. Israel has retaliated with attacks against Iran-backed Hezbollah forces and against anti-Assad military forces in Syria.

Israeli Prime Minister Binyamin Netanyahu said Israel aims "to prevent Hezbollah or the Iranian forces from getting stronger in Syria, especially in obtaining sensitive weapons, and to prevent Iran from establishing military presence in general throughout Syria. "

Israel has been occupying the Golan Heights of Syria since 1967.