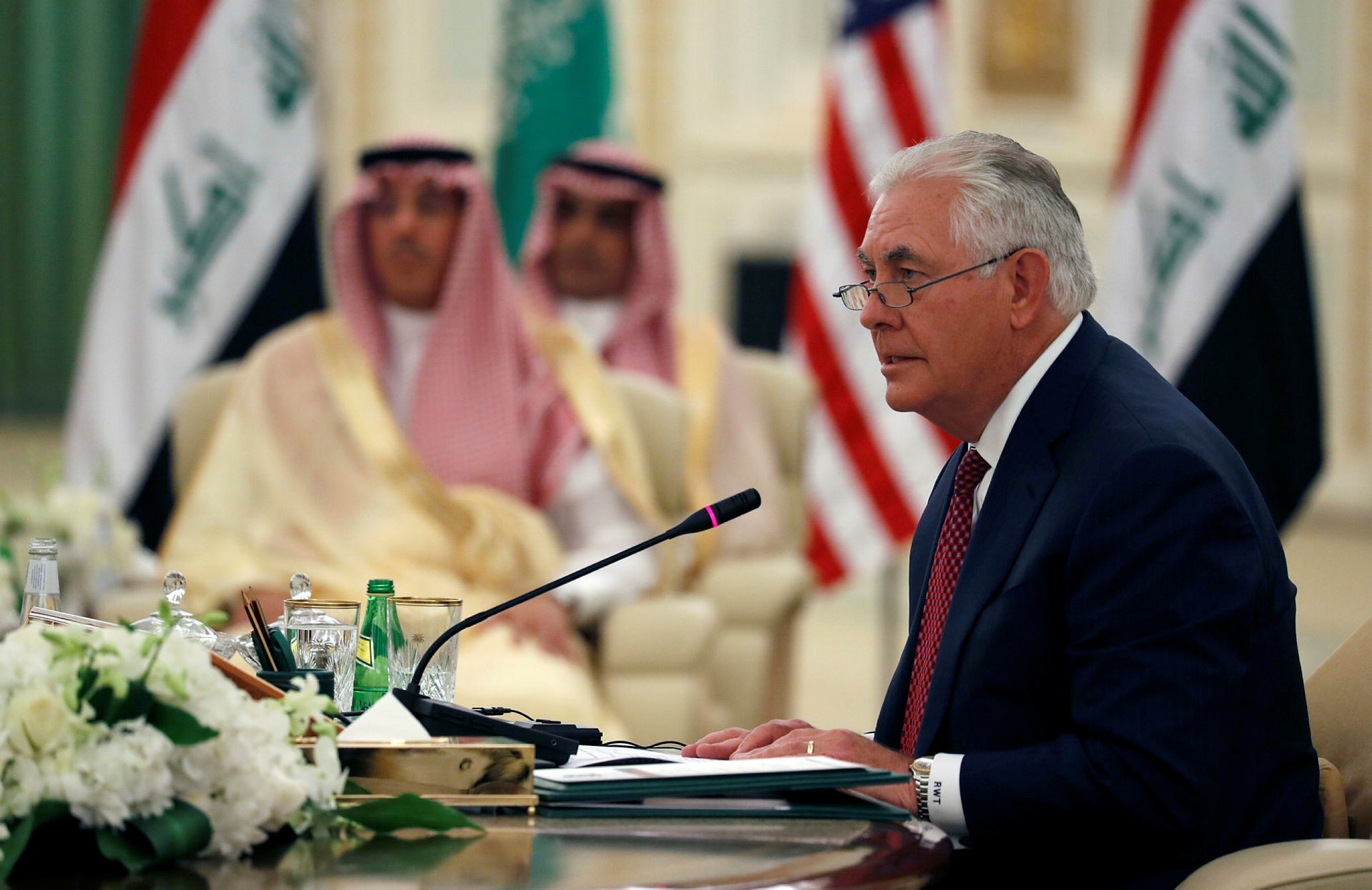 U.S. Secretary of State Rex Tillerson speaks during a meeting of the Saudi-Iraqi Bilateral Coordination Council with Saudi King Salman and Iraqi Prime Minister Haider al-Abadi in Riyadh, Oct. 22.
by Compiled from Wire Services Oct 23, 2017 12:00 am

U.S. Secretary of State Tillerson took part in a meeting between Saudi Arabia and Iraq amid rapprochement between the two Arab countries, aiming to form a united front against its arch-enemy Iran

Tillerson said that the meeting highlights already improving ties and "the great potential of the relations between your countries." Tillerson is seeking Saudi financial and political support for Iraq as Iraq struggles to rebuild after ousting the Daesh terrorist group from major cities and deals with an independence movement in its northern Kurdish region.

"We are facing in our region serious challenges in the form of extremism, terrorism as well as attempts to destabilize our countries," the Saudi monarch said. "These attempts require our full attention."

Iraq is seeking economic benefits from closer ties with Riyadh as both countries suffer from a protracted oil slump. Saudi Arabia is also seeking to counter Iranian influence in Iraq.

After years of tense relations, ties between Sunni-ruled Saudi Arabia and Shiite-majority Iraq have begun looking up in recent months. Last Wednesday, a Saudi commercial plane flew into Baghdad for the first time in 27 years, and diplomatic ties have strengthened.

After former dictator Saddam Hussein's August 1990 invasion of Kuwait, Riyadh severed relations with Baghdad and closed its border posts with its northern neighbor. Ties remained strained even after Saddam's ouster in the 2003 U.S.-led invasion of Iraq, since when successive Shiite-dominated governments in Baghdad have stayed close to Tehran.

Tillerson arrived Saturday in the Saudi capital Riyadh as part of a trip that will also take him to the neighboring Gulf emirate of Qatar, which is locked in a months-long dispute with a Saudi-led Arab bloc.

The Gulf crisis is the worst to hit the region since the establishment of the Gulf Cooperation Council (GCC) in 1981. With the support of the United Arab Emirates, Egypt and Bahrain, the Saudis announced on June 5 that they were suspending all ties with Qatar.

These four Arab nations that cut ties with Qatar previously urged the tiny Gulf nation to commit to six principles on combating extremism and terrorism and to negotiate a plan with specific measures to implement them.

They initially made 13 demands, which Qatar also dismissed. The Qatari foreign minister said on July 31 that the crisis should be solved through diplomacy without touching Qatar's sovereignty and made it clear that Qatar will not accept any demands that are not in line with international law.

Tillerson has since tried unsuccessfully to resolve the dispute, which is the most serious one the region has faced in years.