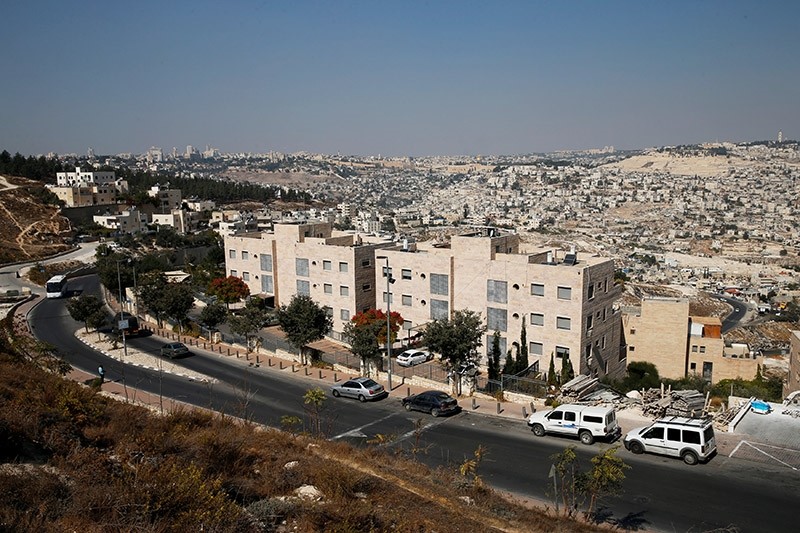 A general view shows Nof Zion, a Jewish settler enclave (foreground) located in the heart of the Palestinian neighbourhood of Jabel Mukaber, in East Jerusalem October 25, 2017. (Reuters Photo)
by Compiled from Wire Services Oct 25, 2017 12:00 am

Israeli authorities approved on Wednesday a major expansion of a Jewish settler enclave in the heart of a Palestinian neighborhood of East Jerusalem, issuing building permits for 176 new housing units.

The expansion would create the largest Israeli settlement inside a Palestinian neighborhood of the city, NGOs say. It will allow the Nof Zion settlement to add 176 housing units to the 91 existing homes.

The settlement is located in the annexed east Jerusalem Palestinian neighborhood of Jabel Mukaber.

The area is located in territory that Israel captured and annexed in a 1967 Middle East war and which Palestinians seek as part of a state they want to establish in the occupied West Bank and the Gaza Strip, with East Jerusalem as its capital.

"We are unifying Jerusalem through actions on the ground," Jerusalem Mayor Nir Barkat said in a statement about the settlement's expansion.

Israel's claim to all of Jerusalem as its capital has not won international recognition, and many countries regard the settlements it has built on occupied land as illegal and obstacles to any future land-for peace deal. Israel disputes this.

The decision is likely to trigger an angry response from the Palestinians, who claim east Jerusalem as their capital.

Wasel Abu Yousif, a member of the Palestine Liberation Organization, called the construction plans in Jabel al-Mukaber "a challenge to all the calls by the international community" to halt settlement building.

Last week, Israel announced approval for the construction of several hundred additional homes for settlers in the West Bank, drawing condemnation from Palestinians and the European Union.

Israeli-Palestinian peace talks have not been held since 2014, with settlement building one of the issues that led to their collapse.

Some 500,000 Israelis live in the West Bank and East Jerusalem, areas that are home to more than 2.6 million Palestinians.