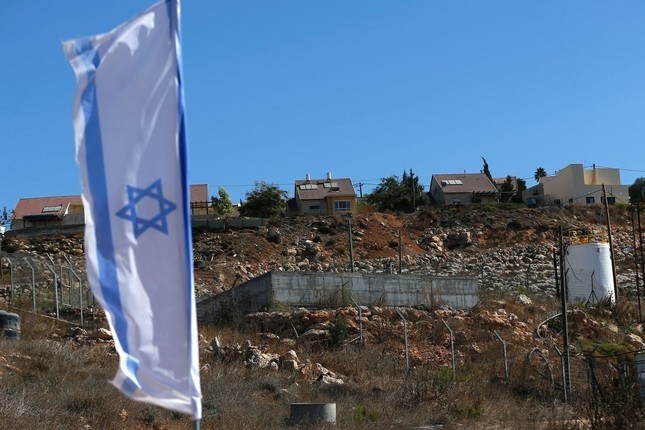 A picture taken on October 2, 2016 shows an Israeli national flag flying next to an Israeli building site of new housing units in the Jewish settlement of Shilo in the illegally occupied Palestinian West Bank. (AFP Photo)
by Anadolu Agency Oct 26, 2017 12:00 am

The UN has warned at least 130 Israeli companies that they would be added to a "black list" if they continued to operate in Palestinian territories illegally occupied by Israel, Israeli daily Yedioth Ahronoth reported Thursday.

In letters sent to the companies, Zeid bin Ra'ad al-Hussein, the UN's high commissioner for human rights, warned that -- if they failed to halt operations in the occupied territories -- they would be included on a UN black list to be issued next year.

According to Yedioth Ahronoth, the targeted companies currently operate in Israeli settlements in the West Bank, East Jerusalem or the Syrian Golan Heights -- all of which are considered "occupied territories" by the UN.

The companies work in a range of fields, including food and pharmaceutical production and advanced manufacturing.

Since 2014, an international boycott of products manufactured on Israeli settlements has gathered momentum.

Some EU customs departments have begun marking products made in the settlements so as to be visible to European consumers.

According to the UN, all Israeli settlement activity in the occupied territories is illegal.