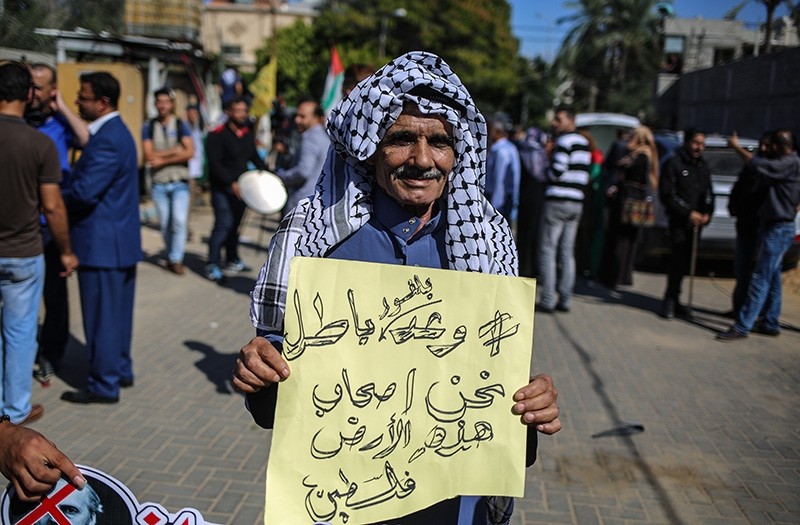 A Palestinian protests in Gaza on the 100th year anniversary of the Balfour Declaration (AA Photo)
by Daily Sabah with Agencies
Nov 02, 2017 12:00 am

Thousands of Palestinians took to the streets in protest Thursday across the West Bank marking a century since the Balfour Declaration, Britain's promise to Zionists to create a Jewish home in what is now Israel.

In Ramallah, some 3,000 protesters marched from the city center to the British Consulate, with many waving black flags and banners with slogans such as "100 years of dispossession." Smaller demonstrations took place in east Jerusalem and elsewhere in the West Bank.

Rawada Odeh, a demonstrator in Jerusalem, said she was protesting because Balfour promised a home to the Zionists while neglecting that there is a "Palestinian population here in our land."

"The land does not belong to Balfour," she said. "We are Palestinians, and we are living here and we are following our issue till we succeed."

The 1917 declaration served as the basis for the British Mandate of Palestine, which was approved in 1920 by the League of Nations. The following decades saw a spike in the number of Jews immigrating to Palestine as Zionist state institutions took root. With that came increased friction with the Arab population, which numbered 800,000 at the declaration's signing.

Israel views the pledge as the first international recognition granted to the Jewish people's desire to return to its historic homeland. It sees Britain as having played a supporting role in a narrative dominated by the determination, heroism and pioneering spirit of the early settlers who fought to build the state.

The Palestinians see the declaration as the original sin, a harbinger of their "nakba," or catastrophe, the mass displacement that resulted from the war surrounding Israel's creation in 1948. That refugee crisis reverberates across the region today, and the Palestinians have cast Israel, through the declaration and its imperialist British patrons, as a colonial enterprise.

In Turkey, groups of protesters marched outside the British Embassy in Ankara, waiving Palestinian and Turkish flags.

Earlier this week, Palestinian ambassador to Ankara Faed Mustaf thanked the Turkish people and government for their support of the Palestinian people and their reconciliation efforts.