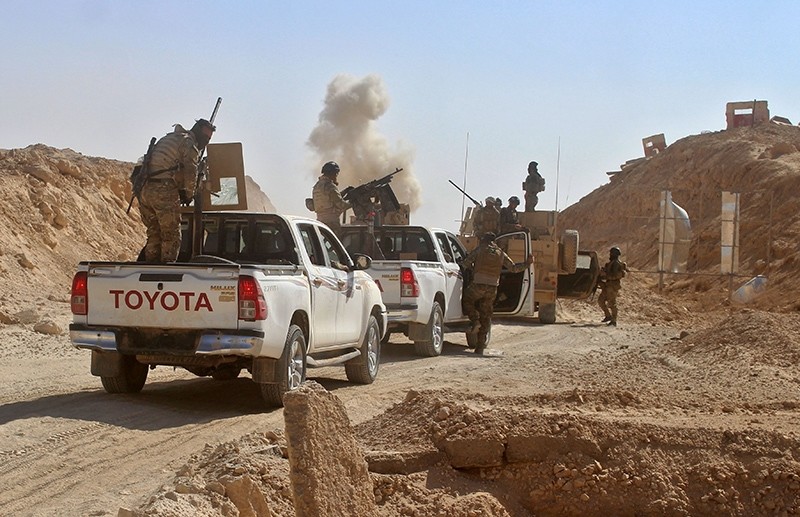 Iraqi security forces stop on a road behind smoke following a car bomb explosion as they head towards al-Qaim in the ongoing fight against remnant pockets of Daesh terrorists, Nov. 1, 2017. (AFP Photo)
by Compiled from Wire Services
Nov 03, 2017 12:00 am

Iraqi forces have entered al-Qaim, one of the last remaining territories in the country still held by Daesh terrorists, and have taken the crossing on Syria border from the terrorist group, Joint Operations Command said Friday.

"Iraqi forces have regained full control" of the border crossing at Al-Qaim, Iraq's Joint Operations Command said in a statement.

Units from the Iraqi army, Counter-Terrorism Services, Sunni tribal forces and Iranian-backed Popular Mobilization forces are participating in an offensive to recapture al-Qaim and Rawa, two towns which lie on the border area with Syria.

Troops from the army and the elite Counter Terrorism Service "have started the assault on the center of Al-Qaim," Staff Major General Noman Abed al-Zobai, the commander of the 7th Division, told French Press Agency (AFP) from the scene.

Shortly afterwards, another officer said on condition of anonymity that the town's Gaza district had fallen from terrorist hands.

"Counter Terrorism Service units and tribal fighters have liberated Gaza after violent clashes, leaving some terrorists dead, while others withdrew towards the center of Al-Qaim," he said.

The paramilitary Hashed al-Shaabi (Popular Mobilization) force said in a statement that terrorists had set fire to civilians' houses in the southwestern neighborhood to make it hard to see them from the air.

Government forces launched the operation last week to seize al-Qaim and its surroundings, a pocket of barren desert along the Euphrates river near the border with Syria.

Home to around 150,000 people, mostly from Sunni tribes, it is the last Iraqi remnant of the self-styled "caliphate" Daesh declared after rampaging across Iraq and Syria in 2014.

The U.S.-led coalition has said around 1,500 Daesh terrorists are left in the area, which it expects to be the scene of the "last big fight" against the group in Iraq.

The Hashed said Friday several Daesh fighters had fled across the border towards the Syrian town of Albu Kamal.