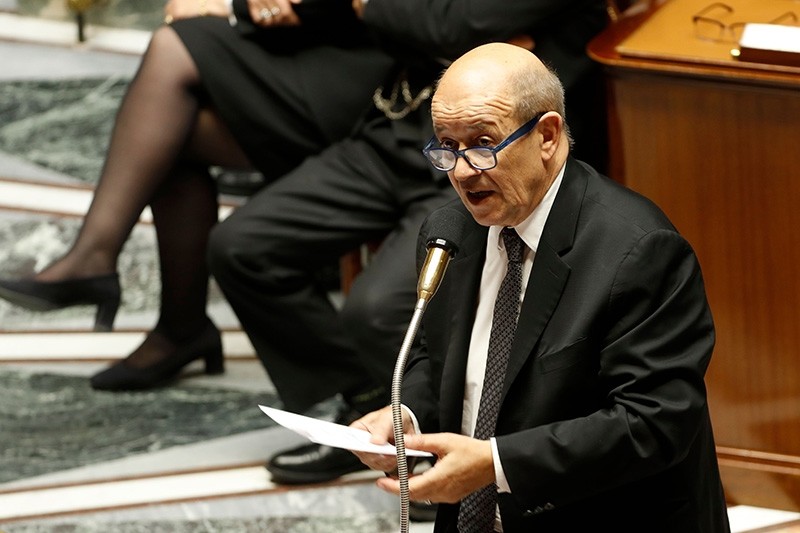 French Foreign Affairs Minister Jean-Yves Le Drian speaks during a session of questions to the government on Nov. 7, 2017 at the National Assembly in Paris. (AFP Photo)
by Daily Sabah with Reuters Nov 10, 2017 12:00 am

France's foreign minister said Friday he believed that former Lebanese Prime Minister Saad al-Hariri was not under house arrest in Saudi Arabia and did not have any particular constraints on his movements. Germany's foreign ministry seconded this assertion later Friday.

"As far as we know, yes. We think he is free of his movements and it's important he makes his own choices," Jean-Yves Le Drian told Europe 1 radio.

France's ambassador to Saudi met Hariri on Thursday before President Emmanuel Macron's unscheduled visit to Riyadh to meet Crown Prince Mohammed bin Salman, diplomats said. It was unclear whether Macron had any contact with Hariri during his stopover in the Saudi capital.

Paris has close ties with Lebanon, a former colony, and with Hariri, who has a home in France after spending several years in the country. Macron said Thursday in Dubai there had been informal contacts with Hariri, but no request to transfer him to France.

"Our concern is the stability of Lebanon and that a political solution can be put in place rapidly," he added.

Later on Friday, German Foreign Ministry spokeswoman said there is no evidence that Hariri is being held against his will by Saudi Arabia, seconding France's assertion that the former prime minister enjoys freedom of movement.

"We have no evidence that Hariri is being detained in Riyadh and we assume that he chooses where he goes," the spokeswoman said during a regular government news conference.

A government spokesman said Germany shared Saudi Arabia's concerns about Iran's interference in Yemen and its support for Syria's Bashar al-Assad and the Lebanese group Hezbollah.

Two top Lebanese government officials said Thursday that Riyadh was holding Lebanon's Saad al-Hariri captive and a third told Reuters that the Saudi authorities had ordered Hariri to resign while he was in Riyadh last weekend, and put him under house arrest.

Le Drian is due in Saudi Arabia on Nov. 16 and is scheduled to also travel to Iran later in the month.