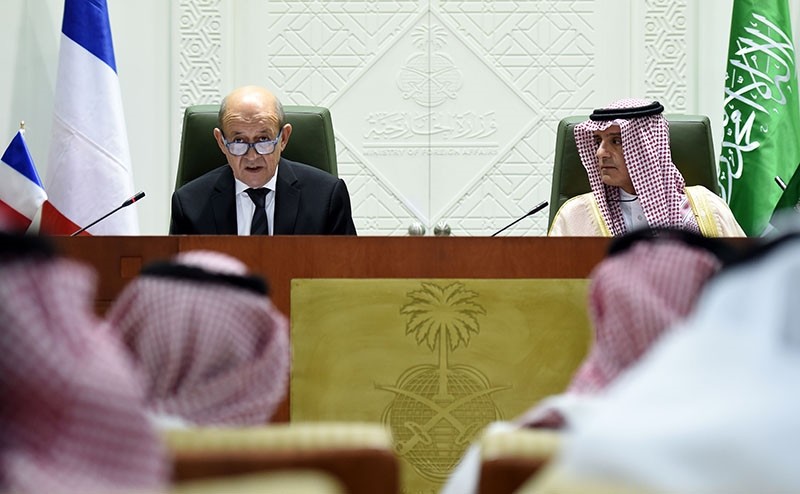 Lebanese Prime Minister Saad Hariri has accepted French President Emmanuel Macron's invitation to travel to France amid accusations of Saudi Arabia is holding him against his will, and he will arrive in Paris on Saturday, where he will return to Beirut within a couple of days.

"He will come to France and the prince has been informed," French Foreign Minister Jean-Yves Le Drian told reporters, referring to Saudi Crown Prince Mohammed Bin Salman with whom he held talks late on Wednesday. Asked about the date of the visit for talks with President Emmanuel Macron, Le Drian replied: "Mr. Hariri's schedule is a matter for Mr. Hariri."

Hariri is expected to leave Saudi Arabia for France within 48 hours, before flying home to Beirut to officially submit his resignation as Lebanese prime minister, a source close to Hariri told Reuters on Thursday.

Couple of hours later, a Lebanese politican also said after a meeting with President Michel Aoun that Hariri will arrive in Paris on Saturday with his family, where he will remain for a few days before coming to Beirut.

Hariri traveled to Riyadh on Nov. 3, before abruptly announcing his resignation in a televised broadcast from Saudi Arabia on Nov. 4. He has remained in the Saudi capital since then, except for a brief to the United Arab Emirates on Nov. 7.

In his address, Hariri cited concerns over the meddling of Iran and its Lebanese ally Hezbollah in regional affairs. He also said he fears for his life.

In his first media appearance since his resignation, Hariri said on Sunday that he had freedom of movement and would return to Lebanon in the coming days.

French President Emmanuel Macron said in a statement on Wednesday that he had invited Hariri to France after speaking to him and Saudi crown prince. The invitation is to visit for a few days and is not an offer of political exile, Macron said, speaking in Germany, stressing that Hariri should be able to return to Lebanon to confirm or withdraw his resignation in person.

France, Lebanon's onetime colonial ruler, has been trying to mediate the crisis. On Wednesday, the front page of the daily Lebanese Al-Akhbar boasted: "Saudi loses,' hailing the French for their proposal to end the deadlock.

Speculation has swirled around the fate of Hariri, who is a dual Saudi citizen. Lebanese President Michel Aoun had said that he will not accept Hariri's resignation until he returns to Lebanon to formally tender it and explain his reasons.

Aoun welcomed Hariri's decision to accept the invite, saying he hoped it "opened the door for a resolution" of the crisis.

"I wait for the return of President (of the council of ministers) Hariri to decide the next move regarding the government," the Lebanese politician told journalists while quoting Aoun's remarks after the meeting.

Hariri has left open the possibility that he may withdraw his resignation if certain conditions are met -- in particular and end to the involvement of Lebanon's powerful Shiite militant group Hezbollah in regional conflicts.

Saudi Arabia is locked in a feud with Iran over regional influence. Both countries support different groups in Lebanon.

Top Lebanese officials and senior politicians close to Hariri have stated that he was forced to quit, whereas Hariri and Saudi Arabia have both denied he is being held in Riyadh or was coerced to resign.

In Riyadh, Saudi Foreign Minister Adel al-Jubeir said the kingdom "rejected" allegations that it is holding Hariri against his will.

"The accusation that the kingdom would hold a prime minister or a former prime minister is not true, especially a political ally like President Saad Hariri," al-Jubeir said during a press conference with Le Drian, who is expected to meet with Hariri later.

"I don't know the source of these accusations. But they are rejected and are baseless and untrue," al-Jubeir said.

Al-Jubeir said Hariri is in Saudi Arabia according to his own will. "He leaves when he wants to," he said.

The resignation of Saudi-aligned Hariri was seen as engineered by Saudi Arabia and raised concerns that it would drag Lebanon, with its delicate sectarian-based political system, into the battle for regional supremacy.

Hezbollah accused the kingdom of seeking to sow chaos in Lebanon.

Al-Jubeir railed against Hezbollah, calling it a "first-class terrorist organization" that should lay down its arms and respect Lebanon's sovereignty.

In the press conference, Le Drian raised concern over Iran's role in the region. He echoed Riyadh's concerns over Iranian "intervention in regional crises" and "hegemonic" intentions.

France has however sought to maintain a nuanced position in the region.

Macron, on his first state visit to the Middle East last week, called for vigilance towards Tehran over its ballistic missile program and regional activities.

But he cautioned against creating a "new front" in a region already fraught with conflicts, including the war in Yemen.

The Arab League is to hold an extraordinary meeting next Sunday at the request of Saudi Arabia to discuss alleged "violations" committed by Iran in the region.