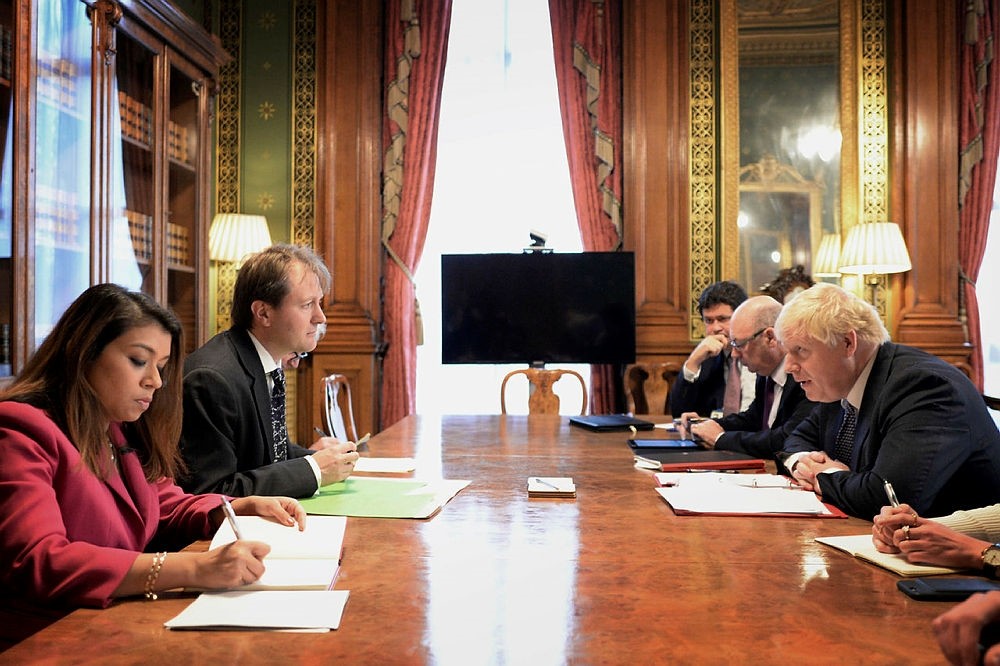 Iran and Britain are discussing the possible release of some 400 million pounds held by London since the 1979 Iranian Revolution as sources claimed the transfer was linked to the release of a jailed Iranian-British aid worker, a claim denied by both UK and Iran.

Nazanin Zaghari-Ratcliffe, a project manager with the Thomson Reuters Foundation, was sentenced to five years after being convicted by an Iranian court of plotting to overthrow the clerical establishment.

According to a report published by The Daily Telegraph, the money might be part of a bargain to free Zaghari-Ratcliffe. It described the payment as a "goodwill" gesture between Britain and Iran and said authorities in London continued to consult with experts over whether the payment could be made under current U.S. and U.N. sanctions.

The Foreign Office said in a statement that it was "wrong to link a completely separate debt issue with any other aspect of our bilateral relationship with Iran."

"This is a longstanding case and relates to contracts signed over 40 years ago with the pre-revolution Iranian regime," it said.

Iran's Foreign Ministry spokesman Bahram Ghasemi was quoted by the semi-official ISNA news agency as saying that the 400 million pounds held by London is a payment Shah Mohammad Reza Pahlavi made for Chieftain tanks that were never delivered.

Ghasemi said Tehran has pursued the refund of the money through long and broad talks with Britain for some time. He denied any connection between the payment and Zaghari-Ratcliffe's case.

"The case of Ms. Zaghari-Ratcliffe and paying debt are two separate issues and there is no link between them," Ghasemi said. He added that she received prison sentence following the "necessary legal procedure."

However, a similar U.S. transfer to Iran happened at the same time American prisoners were released in 2016.

A prisoner exchange in January 2016 that freed Washington Post journalist Jason Rezaian and three other Iranian-Americans also saw the U.S. make a $400 million cash delivery to Iran the same day. That money too involved undelivered military equipment from the shah's era, though some U.S. politicians have criticized the delivery as a ransom payment.

Iran does not recognize dual nationalities, so those detainees cannot receive consular assistance. In most cases, dual nationals have faced secret charges in closed-door hearings before Iran's Revolutionary Court, which handles cases involving alleged attempts to overthrow the government.

Others with ties to the West detained in Iran include Chinese-American graduate student Xiyue Wang, who was sentenced to 10 years in prison for allegedly "infiltrating" the country while doing doctoral research on Iran's Qajar dynasty. Iranian-Canadian national Abdolrasoul Dorri Esfahani, a member of Iran's 2015 nuclear negotiating team, is believed to be serving a five-year prison sentence on espionage charges.

Iranian businessman Siamak Namazi and his 81-year-old father Baquer, a former UNICEF representative who served as governor of Iran's oil-rich Khuzestan province under the U.S.-backed shah, are both serving 10-year prison sentences on espionage.

Iranian-American Robin Shahini was released on bail last year after staging a hunger strike while serving an 18-year prison sentence for "collaboration with a hostile government." Shahini is believed to still be in Iran.

Also in an Iranian prison is Nizar Zakka, a U.S. permanent resident from Lebanon who advocates for internet freedom and has done work for the U.S. government. He was sentenced to 10 years last year on espionage-related charges.

Former FBI agent Robert Levinson, who vanished in Iran in 2007 while on an unauthorized CIA mission, remains missing as well. Iran says Levinson is not in the country and that it has no further information about him, though his family holds Tehran responsible for his disappearance.