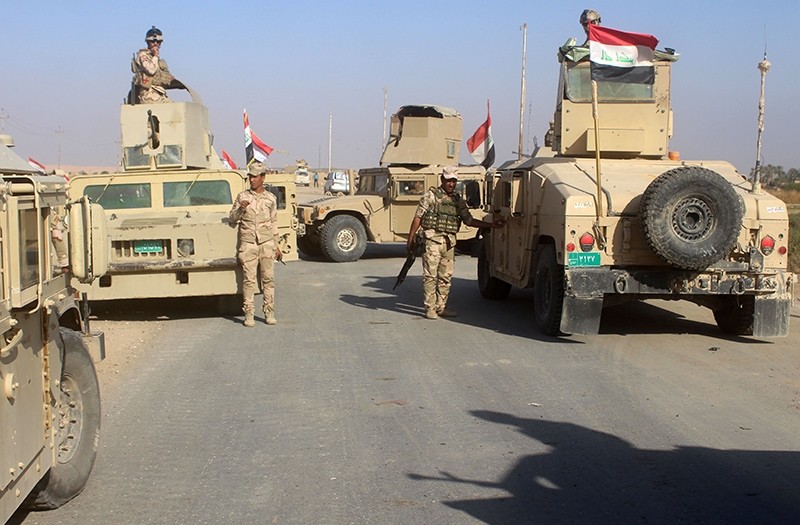 Iraqi security forces gather in the Rawa area during an operation to retake the Euphrates Valley town from the Daesh terrorist group, Rawa, Iraq, Nov. 11, 2017. (AFP Photo)
by Compiled from Wire Services
Nov 17, 2017 12:00 am

Iraq forces, backed by the U.S.-led coalition, captured the border town of Rawa, the last remaining town under Daesh control, on Friday, the Iraqi military said in a statement.

The ministry said in an earlier statement Friday Iraqi military units and local tribal fighters entered the western neighborhoods of Rawa on the Euphrates River in the western province of Anbar.

Rawa, located roughly 230 kilometers west of provincial capital Ramadi, had been considered one of the Daesh terrorist group's last remaining holdouts in Iraq.

"Army units and tribal fighters are in the process of storming the city," Army Major-General Qassem al-Mohammadi told Anadolu Agency.

According to al-Mohammadi, coalition warplanes and Iraqi military helicopters are providing air support for Iraqi army units operating in and around Rawa, which was captured by Daesh in mid-2014.

Daesh fighters swept across Iraq's north and west in the summer of 2014 capturing Iraq's second largest city of Mosul and advancing to the edges of the Iraqi capital Baghdad. Later that year the U.S. began a campaign of airstrikes against the terrorists that fueled Iraqi territorial gains, allowing the military to retake Mosul in July of this year.