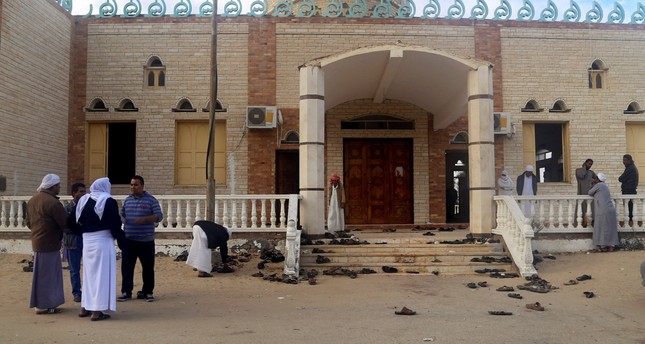 A Sufi leader associated with a mosque where suspected Daesh gunmen massacred hundreds of worshippers in Egypt said Tuesday the terrorists had visited the mosque to warn against holding Sufi rituals there.

Friday's massacre during prayers in the North Sinai town of Rawda killed at least 300 people when suspected Daesh gunmen surrounded the mosque and opened fire.

Daesh, which views some practices of the Sufi sect as heretical, had previously targeted the worshipers by kidnapping one of their leaders and beheading him.

In one of their propaganda outlets, they had also vowed to fight the Sufis in Sinai, singling out the Jariri Sufi order associated with the mosque.

Sheikh Mohamed al-Jawish, deputy head of the Jariri order, said that less than a month ago terrorists visited Rawda mosque and spoke to the muezzin, Fethy Ismail, who issued the call to prayer five times a day.

"They entered the mosque. They were unknown" to the congregants, he told AFP.

He said they told the muezzin, who later died in the massacre: "Don't celebrate the Mawlid. Don't hold Sufi prayer circles."

Mawlids mark the Prophet Mohammed's birthday, and those of Muslim saints. Daesh follows the puritan Salafi theology and views the practice as an unlawful innovation in Islam.

Jawish said that followers of his order had already stopped such gatherings in the North Sinai capital of El-Arish, where Daesh has deadly underground cells that often carry out assassinations and bombings.

Despite the warning, Jawish said no one expected Daesh would return and actually carry out a massacre which shocked even supporters of the group.

"No one expected this. They thought the issue ended with the warning not to hold the Sufi prayer circles," Jawish said in a phone interview.

Daesh has claimed attacks that have killed dozens of Sufis, most notably in Pakistan.

If the mosque was attacked because of its Sufi connections, the massacre would be in line with Daesh in Egypt increasingly focusing on civilian targets as it makes little headway in its Sinai insurgency.

Daesh has killed hundreds of policemen and soldiers in the Sinai, as well as civilians accused of working with the authorities, since the July 2013 ouster of democratically elected president Mohamed Morsi.

Share on Facebook Share on Twitter
Previous in MidEast After backtracking on his earlier resignation, Lebanese Prime Minister... Next in MidEast A large increase in U.S. forces patrolling with Afghan counterparts...
DAILY SABAH RECOMMENDS