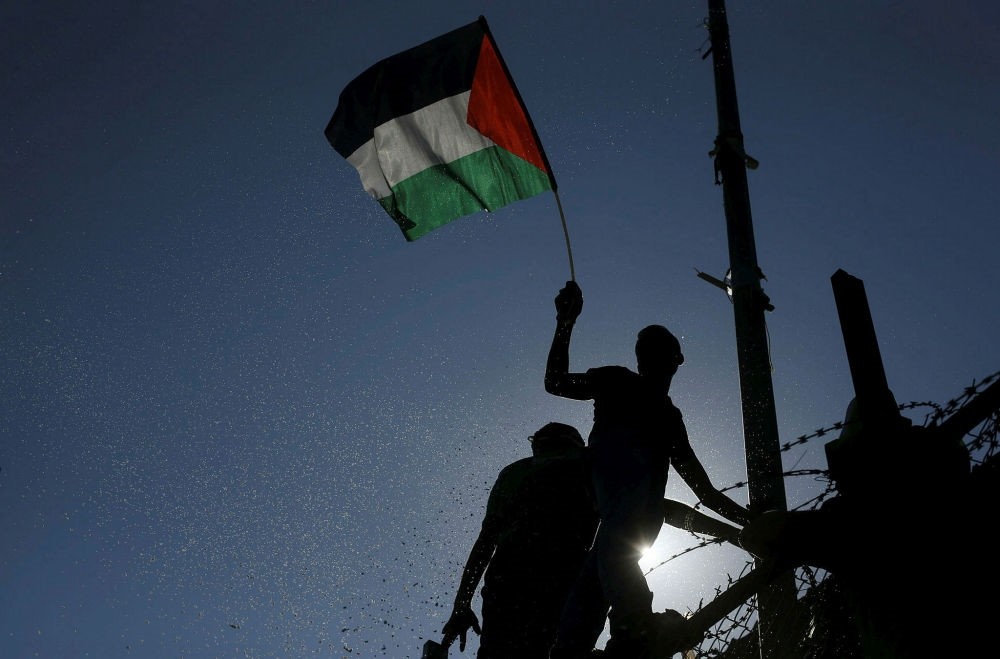 Palestinians called on the international community to support Palestinian statehood and to urge Israel to pull out of territories captured in the 1967 Six-Day War.
by Compiled from Wire Services
Nov 30, 2017 12:00 am

Palestinians rallied for an independent Palestine, decrying the U.N. partition resolution after half a century of deep suffering under occupation imposed by Israel and marked by systematic violations of international law

Dozens of Palestinians staged a rally in the Gaza Strip yesterday to mark the International Day of Solidarity with the Palestinian people with the international community reiterating support for an independent Palestine. The rally was held outside the U.N. office in Gaza City with protesters waving banners decrying the U.N. partition resolution, according to Anadolu Agency (AA).

"On the International Day of Solidarity with the Palestinian people, we reiterate our support for an independent and sovereign State of #Palestine within 1967 borders with Jerusalem as its capital. #Turkey stands with our Palestinian brothers& supports all their efforts for unity," Çavuşoğlu said.

Russian President Vladimir Putin sent a message to his Palestinian counterpart Mahmoud Abbas yesterday to mark the International Day of Solidarity with the Palestinian people.

"Russia, which is a permanent member of the United Nations Security Council [UNSC] and is among the Middle East Quartet, emphasizes the principal stance on its support for the Palestinians' right to seal their own fate," Putin said in his message, according to the official Palestinian news agency WAFA.

Calling for a fair and detailed solution to the conflict in the Middle East in accordance with UNSC decisions, Putin said a Palestinian state with East Jerusalem as its capital should be founded.

The International Day of Solidarity with the Palestinian people is marked each year on Nov. 29 to coincide with the anniversary of U.N. General Assembly Resolution 181. Adopted in 1947, Resolution 181 called for the partition of Mandatory Palestine into Jewish and Arab states following the expiry of Britain's Palestine Mandate. According to the U.N., the day represents "an opportunity for the international community to focus its attention on the fact that the question of Palestine remains unresolved and that the Palestinian people are yet to attain their inalienable rights."

In six days of war in June 1967, Israel seized the West Bank and East Jerusalem from Jordan, the Gaza Strip from Egypt and the Golan Heights from Syria. After the war, Israel deemed the entire Jerusalem to be its "indivisible and eternal capital," a status not recognized internationally. Palestinians want a state in the West Bank and Gaza with East Jerusalem as their capital. The last round of peace talks collapsed in 2014. The U.N. repeats its call for Israel to pull out of territories captured in a 1967 war that Palestinians now seek for a state, saying it would benefit both sides after 50 years of enmity.

Since U.S. President Donald Trump took office in January, Israel has announced plans to build over 6,000 settler homes in the West Bank and East Jerusalem, occupied territories claimed by the Palestinians. U.S. President Barack Obama's administration was deeply opposed to Israel's expansion of settlements and in December withheld its veto from a U.N. Security Council resolution condemning the policy. The international community regards all Israeli settlements in occupied Palestinian territories to be illegal and a major obstacle to Middle East peace. The area, captured by Israel in 1967, is not sovereign Israeli territory and Palestinians there are not Israeli citizens and do not have the right to vote.