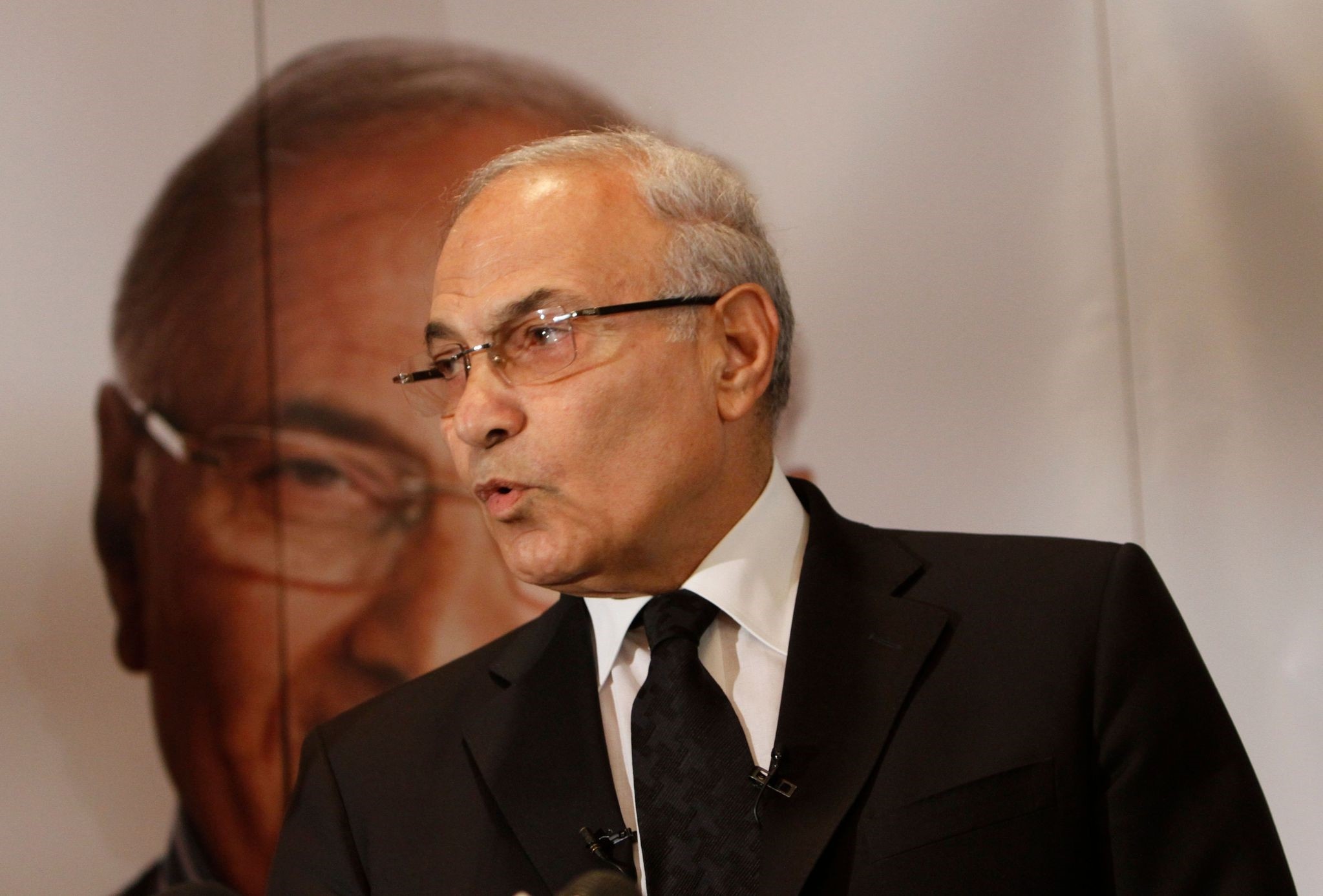 Former Egyptian prime minister Ahmed Shafiq came on television late Sunday night to announce he is still considering his presidential bid, his first appearance since arriving in Cairo on Saturday.

"Today I am here in the country, so I think I am free to deliberate further on the issue, to explore and go down and talk to people in the street ... so there's a chance now to investigate more and see exactly what is needed ... to feel out if this is the logical choice," Shafik said.

The interview on private Dream TV channel was Shafik's first public appearance since leaving the United Arab Emirates on Saturday for Cairo. His family said he was "kidnapped" and sources said he had been picked up by Egyptian officials at Cairo airport.

Adly did not say whether Shafiq was free to leave the hotel, which she did not identify by name.

Shafiq's family said earlier Sunday it has lost contact with him since they say he was deported from the United Arab Emirates to Cairo days after announcing his intention to run for president next year.

Shafiq, a former air force chief and government minister, has been seen by critics of President Abdel Fattah al-Sisi as a potential challenger to the former military commander who is widely expected to run for a second term next year.

Supporters see Sisi, who is allied with UAE and Saudi Arabia, as key for Egypt's stability. But critics say he has jailed hundreds of dissidents and eroded freedoms gained after the 2011 uprising that ousted former leader Hosni Mubarak.

Details about what happened to Shafiq were unclear on Sunday. He made his surprise announcement about running in the 2018 election from the United Arab Emirates (UAE), where he has been based with his family, on Wednesday.

Shafiq's family said he was taken from their home on Saturday and flown by private plane back to Cairo. A Reuters witness said Egyptian authorities escorted him in a convoy from the airport.

"We know nothing about him since he left home yesterday," Shafiq's daughter May told Reuters. "If he was deported he should have been able to go home by now, not just disappear. We consider him kidnapped."

The family and lawyer said they planned to file complaints with the prosecutor's office around Shafiq's whereabouts.

"I call on the Egyptian authorities.... to allow me to meet him to check on him and confirm his arrival to Egypt," Hussein had said in a statement on her Facebook page.

UAE authorities confirmed he left the Emirates without giving any details about why. Egypt's foreign ministry said it was not responsible for the case.

An official source at the interior ministry said: "We do not know anything about Shafiq.

"We did not arrest him and we did not receive any requests from the prosecution to arrest him or bring him back."

Shafiq's abrupt departure from UAE came weeks after Lebanese officials accused Saudi Arabia of meddling in its affairs by forcing Prime Minister Saad al-Hariri to resign by holding him against his will.

Saudi Arabia denied those charges but the case prompted a political crisis in Lebanon and pushed the country back into centre stage of a regional power struggle between Riyadh with its Sunni Gulf allies and Iran.

Sisi has won support from Gulf states, presenting himself as a bulwark against Islamist militants since as army commander he led the military's overthrow in 2013 of former president Mohamed Mursi of the now banned Muslim Brotherhood.

Earlier this year, he brushed off widespread public criticism and ratified an agreement that cedes sovereignty over two uninhabited Red Sea islands to Saudi Arabia.

Shafiq, who narrowly lost a 2012 presidential bid against Mursi, joined several other lower-profile candidates who have also said they will run, though some say they believe they have no chance against Sisi.

Egyptian pro-government media and talk shows, which had immediately come out against Shafiq over his bid, criticized the former air force commander again on Sunday.

State-owned newspapers published a story calling Shafiq calling "the fleeing air marshal" and said his lawyer had made deals with outlets sympathetic to the banned Muslim Brotherhood to help with Shafiq's campaign. They provided no evidence.

Two private lawyers filed legal complaints against Shafiq with the public prosecutor in Egypt because an announcement linked to his election bid had been broadcast on Qatari-based Al Jazeera.

Egypt has long accused the broadcaster of being a mouthpiece of the Brotherhood, which it denies.

One Egyptian judicial source said on Saturday Shafiq did not face any criminal cases in Egypt. He was acquitted, or had charges dropped, in several cases in the past, including for corruption.

Sisi has yet to announce his own intentions for the election, saying he would follow the will of the people after presenting his achievements in the next two months.

His supporters dismiss criticism over rights abuses and say any measures are needed for security in the face of an extremist insurgency that has killed hundreds of police and soldiers in the last four years.

But his government is struggling to crush the insurgency in the North Sinai region and has also enacted painful austerity reforms over the last year to revive the economy which critics say have eroded his popularity.