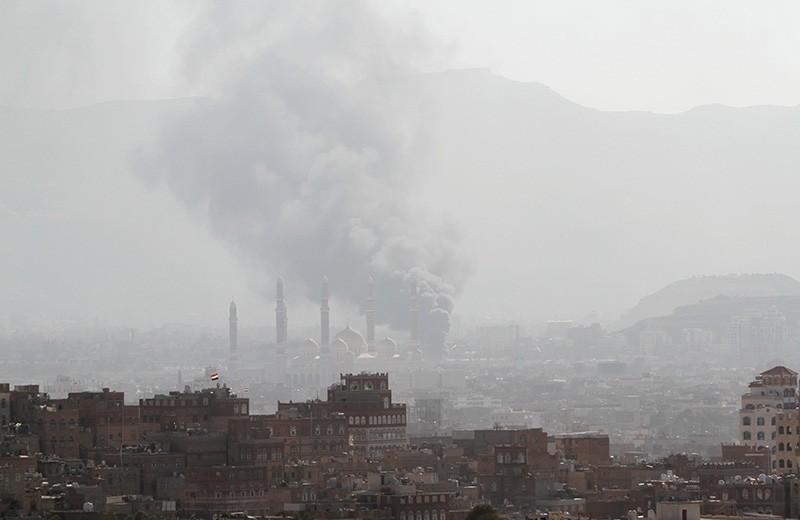 Smoke rises during the battle between former Yemeni President Ali Abdullah Saleh's supporters and the Houthi fighters in Sanaa, Yemen, Dec. 2, 2017. (Reuters Photo)
by Dec 03, 2017 12:00 am

Saleh announced on Saturday he was ready to turn a "new page" in ties with the Saudi-led coalition fighting in Yemen if it stopped attacks on Yemeni citizens, in a move that could pave the way to end nearly three years of war.

The apparent shift in position came as Saleh's supporters battled Houthi fighters in Hadda, a district in southern Sanaa where members of Saleh's family, including his nephew Tareq, live. It was the fourth day of clashes sparked by what Saleh's General People's Congress (GPC) called an attempt to seize a main mosque in the city.

The fighting has killed dozens of people and wounded hundreds, according to the International Committee of the Red Cross, and raised concern of further casualties among civilians.

Turkey's official Anadolu Agency reported Sunday that at least 36 people have been killed in two days of rebel infighting, citing a medical source, adding that 225 people were also injured in the violence.

The clashes had added a new layer to an already complex situation in Yemen, one of the poorest countries in the Middle East, where a proxy war between the Iran-aligned Houthis and the Saudi-backed Hadi has caused one of the worst humanitarian crises in recent times.

Saleh's announcement was welcomed by the Saudi-led coalition, which has struggled to achieve any progress against the Houthi-Saleh alliance that had controlled most of northern Yemen since 2015 and forced President Abd-Rabbu Mansour Hadi to flee into exile.

Saleh had on Saturday issued his message to the Saudi-led coalition in a speech broadcast from the studios.

Yemen descended into violence in late 2014 when the Houthis, a group that hails from the Zaidi branch of Shiite Islam, marched on Sanaa and seized control of the government.

The group, backed by government troops loyal to Saleh, resumed its march south and attacked Hadi's interim capital in Aden, forcing Hadi to flee and inviting the Saudi-led alliance to join the fighting.