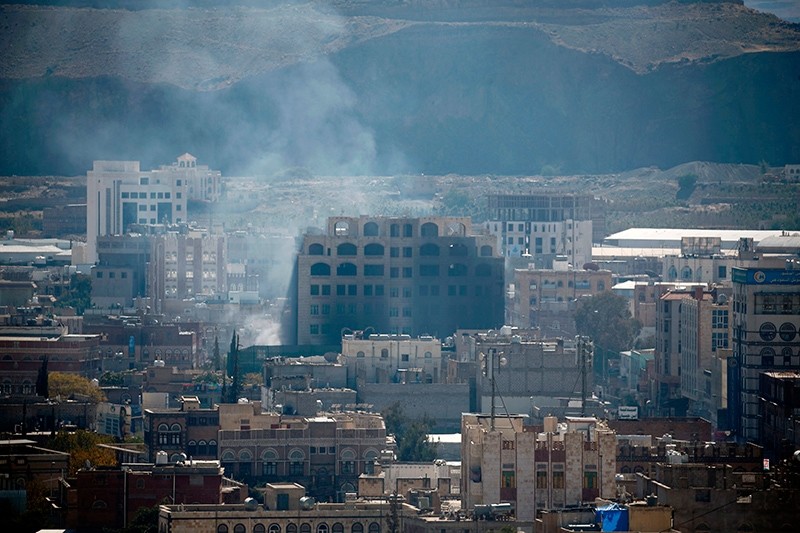 Smoke billows behind a building during clashes between Houthi rebels and supporters of Yemeni ex-president Ali Abdullah Saleh in Sanaa, Yemen, Dec. 3, 2017. (AFP Photo)
by Compiled from Wire Services Dec 04, 2017 12:00 am

The party member, who insisted on anonymity due to the issue's sensitivity, told Anadolu Agency that Houthi militants had shot Saleh dead after his car was stopped near Sanaa while en route to his hometown in the Sinhan district south of the capital.

According to the same source, Houthi militiamen stopped Saleh's motorcade some 40 kilometers south of Sanaa before taking him to an unknown location and shooting him by firing squad.

After Houthis blew up Saleh's house Monday in the center of Sanaa, the interior ministry's radio station announced Saleh had been killed. GPC first denied their leader's death, then later confirmed it, sharing a video and pictures of Saleh's body.

The Houthi-run Masirah TV announced the death of the "leader of the traitors" on Monday, referring to Saleh, who until last week was in a fragile alliance with the rebels. It gave no further details.

A senior official with Yemen's internationally-recognized government confirmed to The Associated Press that Saleh had been killed. He sent a video purportedly showing Saleh's body being carried away by a group of armed men chanting, "God is Great."

The official spoke on condition of anonymity because he wasn't authorized to speak to the press. It was not immediately possible to confirm the authenticity of the video, which was circulating widely.

Saleh ruled Yemen for more than three decades until he was forced to resign following an Arab Spring uprising in 2011. He remained in the country, however, and continued to wield power from behind the scenes. In 2014, his forces allied with the Houthis, despite the fact that as president he had gone to war with them on more than one occasion.

Earlier Monday, Yemeni President Abedrabbo Mansour Hadi has ordered his forces to retake Sanaa from Houthi rebels, an official from his office said Monday, as insurgents were fighting for control of the capital.

"The president has ordered Vice President Ali Mohsen al-Ahmar, who is in Marib (east of Sanaa), to activate military units and advance toward the capital," the source told French Press Agency (AFP) on condition of anonymity.

The International Committee of the Red Cross (ICRC) said fighting in Yemen's capital has intensified, with the known toll from three hospitals reaching at least 125 killed and 238 wounded in the past six days.

"We are supporting the main hospitals in Sanaa who urgently need war-wounded kits," ICRC spokeswoman Iolanda Jaquemet said. "We are also looking at donating dead body bags to hospitals which are actually asking for them, and we hope to donate fuel to the main hospitals because they depend on generators."

The ICRC "relocated" 13 international staff to Djibouti from Sanaa on Monday, she said.

The Saudi-led coalition fighting Houthis warned civilians to evacuate rebel-held areas in the capital Sanaa, after the government ordered an advance to retake the city.