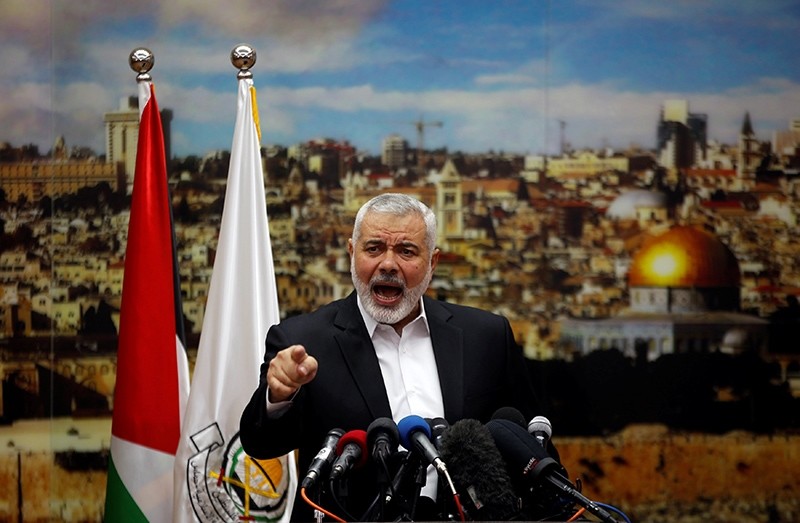 Hamas Chief Ismail Haniyeh gestures as he delivers a speech over U.S. President Donald Trump's decision to recognize Jerusalem as the capital of Israel, in Gaza City, Dec. 7, 2017. (Reuters Photo)
by Daily Sabah with Agencies Dec 07, 2017 12:00 am

"We should call for and we should work on launching an intifada in the face of the Zionist enemy," Haniyeh said in a speech in Gaza.

Haniyeh added that the Palestinian uprising against the move will start Friday.

"We affirm that Jerusalem is united, not Eastern or Western, and will remain the capital of Palestine, all of Palestine," the Hamas leader said.

Meanwile, the Israeli military said it was deploying reinforcements to the occupied West Bank.

"Upon the conclusion of the general staff's situation assessment, it was decided that a number of battalions will reinforce in the area of [the West Bank], as well as combat intelligence and territorial defense," the military said in a statement.

"In addition, more standby forces were defined, as part of the (military's) readiness to possible developments."

Trump recognized the holy city of Jerusalem as Israel's capital Wednesday, prompting a universal diplomatic backlash amid fears of widespread tension in the Middle East.

America's leader appeared further isolated, as allies and foes alike denounced his decision and Palestinians questioned whether their right of statehood, as part of a peace deal brokered by Washington, was still possible.

Jerusalem remains at the core of the Israel-Palestine conflict, with Palestinians claim East Jerusalem — occupied by Israel since 1967 — as the capital of a future Palestinian state.