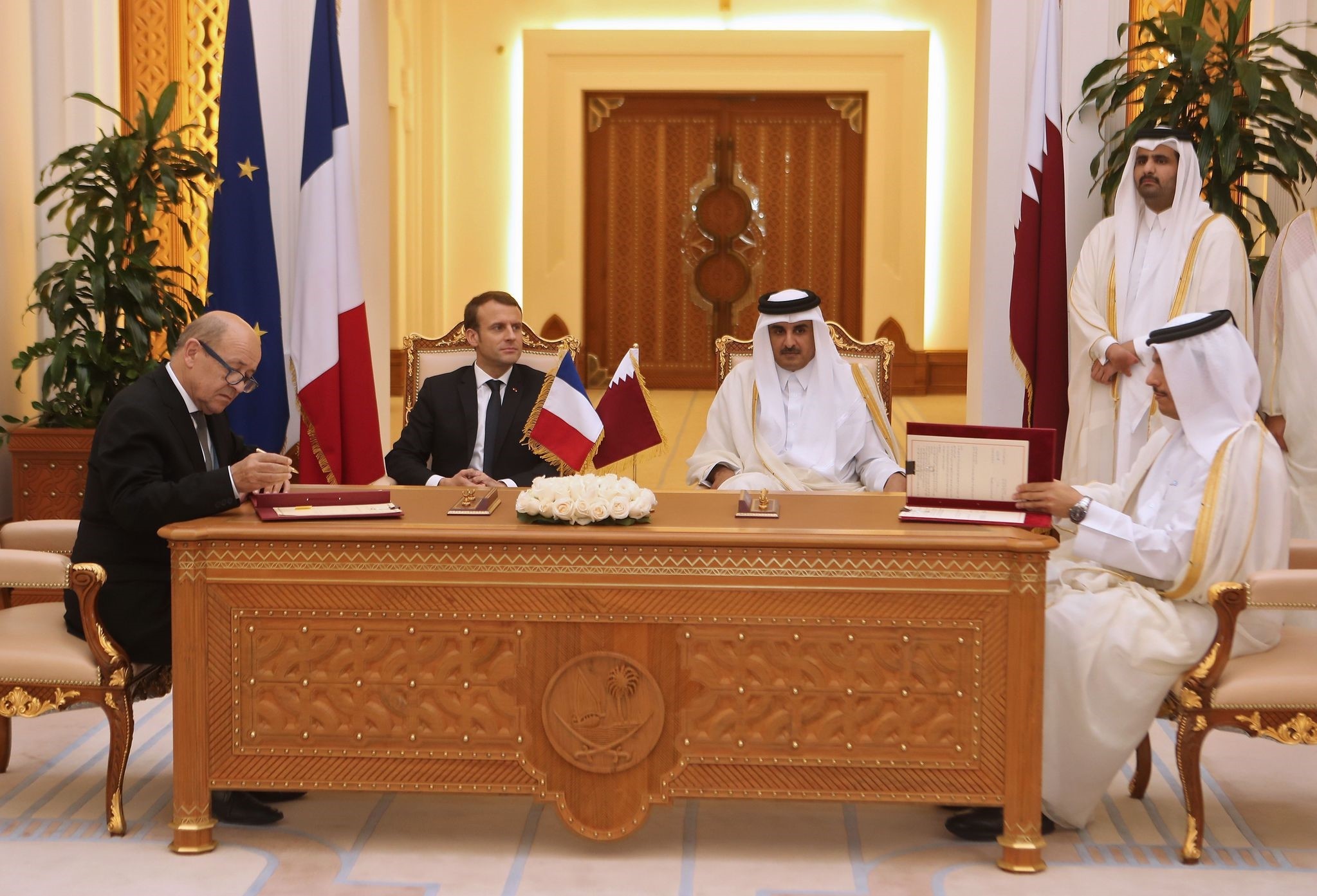 Qatar's ruling emir and French President Emmanuel Macron signed 12 billion euros ($14 billion) in deals during the French president's visit to Doha on Thursday, including the purchase of 12 French-made Dassault Rafale fighter jets with the option of buying 36 more.

The agreement brings the total number of Rafales the Gulf Arab country will have to 36.

Macron is traveling with Foreign Minister Jean-Yves Le Drian, who in 2015 as defense minister helped negotiate a deal with Qatar to buy 24 Rafale fighter jets. As part of a deal negotiated two years ago, Qatar exercised its right to purchase 12 aircraft.

France and Qatar also agreed that Qatar would purchase 490 VBCI armored vehicles from French firm Nexter, and signed a transportation deal with France's national rail authority to manage and maintain Doha's planned metro, as well as a light rail system north of Doha.

Macron's one-day trip to Qatar comes as the Gulf nation faces continued isolation and a boycott by some of its Arab neighbors. Saudi Arabia, the United Arab Emirates, Bahrain and Egypt cut relations with Qatar over allegations it supports extremists and has too-close relations with Iran.

Qatar has long denied supporting extremists and shares a massive offshore natural gas field with Tehran. It has also rejected demands put forth by the quartet as infringement on its sovereignty.

In a rare press conference, held with Macron, Qatar's ruling emir Sheikh Tamim bin Hamad Al Thani said it was especially disappointing that neighboring states cut off ties with Qatar during the holy month of Ramadan in June.

"For us, our dignity and the sovereignty of Qatar are above everything. If our brothers want to resolve this crisis then we are ready on a basis that is clear and feasible to everyone and without the interference of anyone's sovereignty," he said.

Earlier this week, a Gulf Cooperation Council meeting in Kuwait failed to bring the standoff any closer to a resolution.

While in Qatar, Macron traveled to the vast al-Udeid air base, which hosts U.S.-led international coalition operations against Daesh in Iraq and Syria and the war in Afghanistan.

The air base is home to some 10,000 American troops and the forward headquarters of the U.S. military's Central Command. France also has a contingent of several hundred French troops in Qatar as part of the 1,200 French forces active in the region in the battle against Daesh.

Macron smiled and shook hands with the French and American soldiers who greeted him at the base before walking into a meeting with the base's top commanders.

Speaking to coalition soldiers, he said the next few months of battle will determine the outcome of the war against Daesh in Iraq in Syria.

"This military win does not signify the end of the operations and the end of our battle because first we need to stabilize and win peace in Iraq and Syria," he told troops. "Next spring is decisive in the situation in Iraq."

Macron also stressed in his remarks at the air base that France wants to avoid partition in Syria and "avoid the domination of certain international elements whose interests contradict peace."

Later, during his joint press conference, he noted the importance of maintaining the Iranian nuclear accord that France helped negotiate alongside other world powers. He also called for an internationally defined framework to contain Iran's regional ambitions and "ways to put limits" on Iran's presence in Syria, Iraq, Lebanon and Yemen.