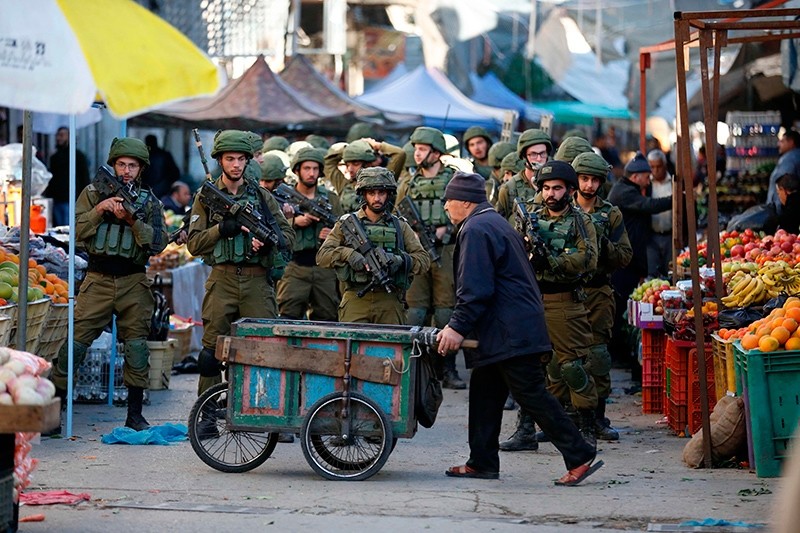 Israeli forces walk down a street during clashes with Palestinian demonstrators in Hebron in the Israeli-occupied West Bank, Dec. 9, 2017. (AFP Photo)
by Anadolu Agency Dec 10, 2017 12:00 am

An Israeli army squad commander has been caught on video stealing apples from a Palestinian vendor in the West Bank city of Hebron.

The commander, who stole the apples from a Palestinian vendor escaping clashes between Israeli forces and Palestinian protestors, has become the brunt of jokes on social media.

The Israeli army, for its part, has responded by suspending the soldier.

"This behavior was not what we expect from a soldier or a commander in the Israeli army," the army said in a statement. "The commander [who stole apples] was suspended and will be slapped with discipline punishment."

Israeli army suspends a squad commander after he was caught on video stealing apples from Palestinian vendor for himself and his friends amid violence in Hebronhttps://t.co/rMptCrLrlo pic.twitter.com/lr7CLv77vn

The identity of the commander, who serves at Givati Brigade, was not disclosed.

Tension has risen across the Palestinian territories since U.S. President Donald Trump officially recognized Jerusalem as Israel's capital on Wednesday.

Jerusalem remains at the heart of the Israel-Palestine conflict, with Palestinians hoping that East Jerusalem — now occupied by Israel — might eventually serve as the capital of a Palestinian state.