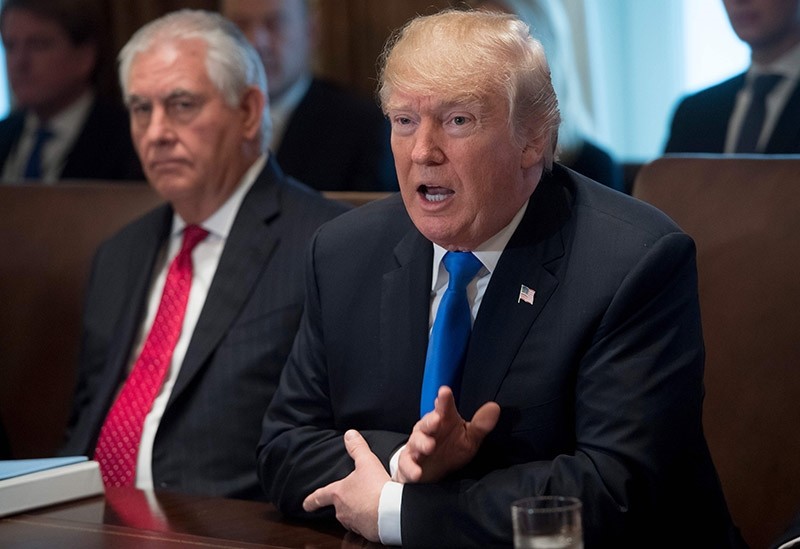 This file photo taken on December 20, 2017 shows US President Donald Trump speaking alongside Secretary of State Rex Tillerson (L) during a Cabinet Meeting in the Cabinet Room at the White House in Washington, DC. (AFP Photo)
by Jan 02, 2018 12:00 am

Pakistan has summoned the U.S. ambassador, an embassy spokesman said Tuesday, a rare public rebuke after Donald Trump lashed out at Islamabad with threats to cut aid over "lies" about militancy.

Ambassador David Hale was asked to go to the foreign office in the Pakistani capital Monday night, after Islamabad responded angrily to the U.S. President's allegations that it provided safe havens for militants in the latest spat to rock their alliance.

A U.S. embassy spokesman confirmed Hale met officials, but added, "We don't have any comment on the substance of the meeting."

There was no immediate response from foreign office officials.

Trump used his first tweet of 2018 to tear into Islamabad.

"The United States has foolishly given Pakistan more than 33 billion dollars in aid over the last 15 years, and they have given us nothing but lies & deceit, thinking of our leaders as fools," Trump said in the early-morning New Year's Day tweet.

"They give safe haven to the terrorists we hunt in Afghanistan, with little help. No more!"

Pakistan hit back swiftly, saying it had done much for the United States, helping it to "decimate" Al-Qaeda, while getting only "invective & mistrust" in return in angry comments from its foreign and defense ministers.

Islamabad has repeatedly denied the accusations of turning a blind eye to militancy, lambasting the United States for ignoring the thousands who have been killed on its soil and the billions spent fighting extremists.

After the September 11, 2001 terror attacks in the United States, Washington forged a strategic alliance with Islamabad to help in its fight against militancy.

But U.S. leaders have often complained that Pakistan, long accused by Washington and Kabul of supporting the Taliban, has done too little to help.

Of foremost concern is Islamabad's attitude toward the powerful Haqqani network, whose leader Sirajuddin Haqqani is the deputy leader of the Afghan Taliban.

The group is accused of some of the most lethal attacks on U.S. forces in Afghanistan, and was dubbed by America's former top military officer Mike Mullen as a "veritable arm" of Pakistani intelligence.

For many years it found safe haven in Pakistan's semi-autonomous northwestern tribal areas.

However the Pakistani military launched an operation there in 2014, and now insists it has eradicated all safe havens in the country.

U.S.-Pakistani ties, long contentious, have taken a nosedive under Trump, who first signaled that the Washington was reassessing the fractious relationship in August, when he accused Islamabad of harboring "agents of chaos."

The remarks triggered a series of high-level diplomatic meetings in the U.S. and Pakistan, but Islamabad has given few signs of concessions.

The Trump administration told Congress in August it was weighing whether to withhold $255 million in earmarked aid to Islamabad over its failure to crack down more effectively on terror groups in Pakistan.