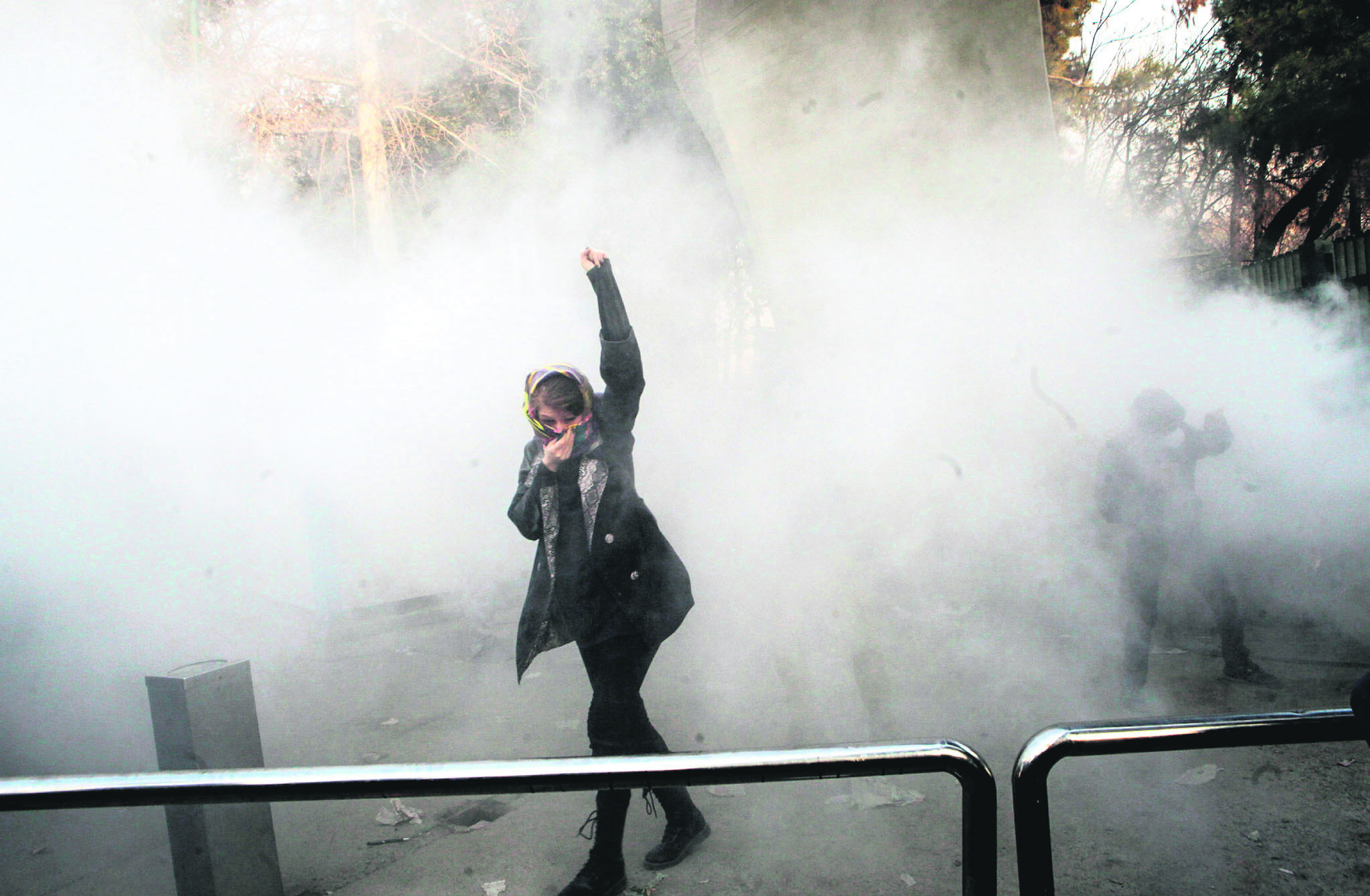 Iranian students clash with riot police during an anti-government protest around the University of Tehran, Iran, Dec. 30.
by Daily Sabah with Wires Jan 03, 2018 12:00 am

The violence in the ongoing protests spurred by economic problems in Iran, which quickly turned into anti-government demonstrations, has mounted amid an increasing death toll

Violent demonstrations have rocked Iran with protests that started over the economy now turning against the government as a whole. The number of people killed in the protests has increased to 22, according to reports. Almost a week of street protests in Iran that initially focused on economic hardships have turned overtly political. Protesters' slogans have revealed displeasure with Iran's activities in Syria and aid to the Lebanese-based group Hezbollah, as Tehran's direct involvement in the six-year war in Syria has become a considerable burden to its economy. Demonstrators have also asked for freedom for political prisoners, many of whom have death sentences.

The demonstrations began last Thursday in Mashhad, Iran's second-largest city and home to a famous Shiite shrine. The protests then rapidly spread throughout the rest of the country of 80 million people. Unlike previous protests, like those in 2009, those at the forefront are not organized or already politicized groups, like students or organizations, but the lower middle class displeased with ongoing economic problems. These people link the economic problems directly to Iran's expansionist ambitions as one of the popular slogans is: "Leave Syria, look at Iran."

The government's main challenge is to find a way to suppress the protests without provoking more anger as demonstrators attack police stations, banks and mosques. So far, while the authorities have threatened strong measures, in practice they have largely been restrained, arresting hundreds of people but holding back elite forces that have crushed past unrest. The authorities want to take control while avoiding a repeat of 2009.

The state has a powerful security apparatus but so far it has refrained from sending in the elite Revolutionary Guards, the Basij militia and plain-clothed security forces which crushed the 2009 uprising and killed dozens of protesters.

Iran's supreme leader yesterday blamed the protests roiling the country on "enemies of Iran" who he said were meddling in its internal affairs. "In the recent days' incidents, enemies of Iran utilized various means - including money, weapons, politics and intelligence apparatuses - to create problems for the Islamic system," he said, in his first public remarks since the demonstrations began.

Khamenei said he would elaborate further in the coming days. Iranian leaders often accuse the United States, Israel and Britain of seeking to overthrow the clerically overseen government.

U.S. President Donald Trump yesterday wrote on Twitter that "the people of Iran are finally acting against the brutal and corrupt Iranian regime."

"All of the money that President Obama so foolishly gave them went into terrorism and into their 'pockets,'" Trump wrote, apparently referring to the nuclear deal reached under his predecessor. "The people have little food, big inflation and no human rights. The U.S. is watching!"

President Hassan Rouhani championed a deal struck with world powers in 2015 to curb Iran's nuclear program in return for the lifting of most international sanctions. However, he has failed to deliver on promises of prosperity in the OPEC oil producer where youth unemployment reached 28.8 percent this year. Still, the economy has improved under Rouhani's government and it is no longer in dire straits.

Iran's recovery has been curbed by tensions with the United States. President Donald Trump has raised the possibility that sanctions could be reimposed or new ones introduced.