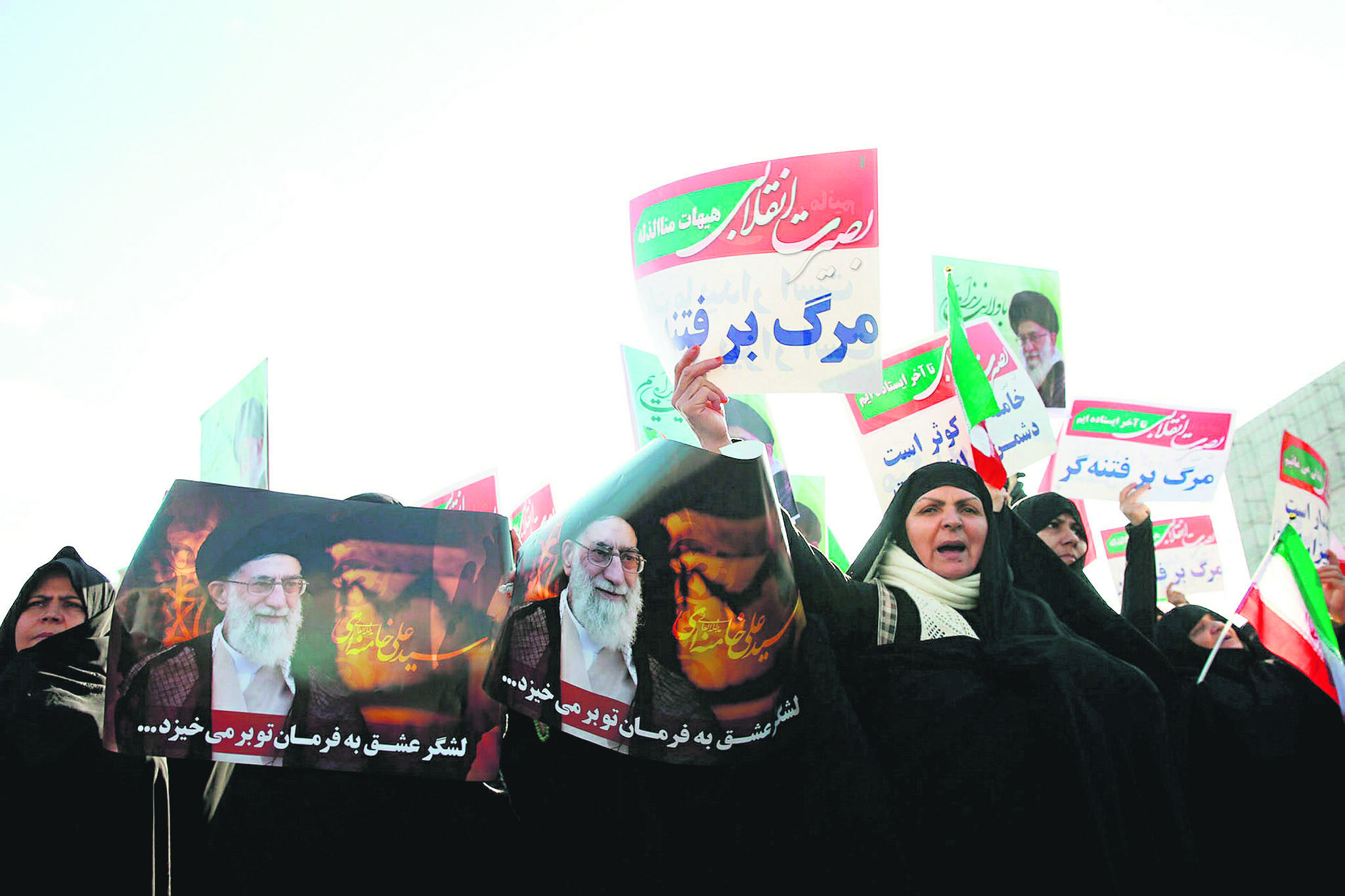 Iranian pro-government supporters hold posters of Supreme Leader Ayatollah Ali Khamenei during a rally in support of the regime after authorities declared the end of deadly unrest, Mashhad, Jan. 4.
by Compiled from Wire Services Jan 05, 2018 12:00 am

Iran saw another day of large pro-regime rallies yesterday after authorities declared the end of deadly unrest and turned attention to addressing the economic concerns that fueled protests. State television showed huge crowds marching in support of the government across 10 cities yesterday morning, including Isfahan, Ardebil and Mashhad.

Iran's army chief said yesterday police forces had already quelled anti-government unrest that has killed 21 people but that his troops were ready to intervene if needed, official media reported, as new state-sponsored pro-government rallies were held.

"Although this blind sedition was so small that a portion of the police force was able to nip it in the bud ... you can rest assured that your comrades in the Islamic Republic's army would be ready to confront the dupes of the Great Satan [United States]," Maj. Gen. Abdolrahim Mousavi was quoted as saying, as reported by Reuters.

Following six days of demonstrations, the elite Revolutionary Guards Corps said on Wednesday that it had deployed forces to quell unrest in three provinces where most of the trouble had occurred. That was the clearest sign yet that authorities were taking the protests seriously. The Revolutionary Guards, the sword and shield of Iran's Shiite theocracy, were instrumental in suppressing an uprising over alleged election fraud in 2009 in which dozens were killed.

The anti-government demonstrations, which seem to be spontaneous and without a clear leader, erupted a week ago in Iran's second city of Mashhad over economic hardships -- mostly youth unemployment and alleged corruption.

The unrest caused international concern, with the United States in particular accusing authorities of a crackdown on dissent.

U.S. President Donald Trump, who has repeatedly tweeted his backing for Iranian protesters, wrote, "You will see great support from the United States at the appropriate time!"

French President Emmanuel Macron on Wednesday said it was important to maintain dialogue with Iran, warning that the tone of comments adopted by the United States, Israel and Saudi Arabia towards Tehran was virtually a path to war.

"The official line pursued by the United States, Israel and Saudi Arabia, who are our allies in many ways, is almost one that would lead us to war," Macron told reporters. The line being taken was "a deliberate strategy for some," he said. France, he said, wanted to maintain some balance.

"Otherwise, we end up surreptitiously rebuilding an 'axis of evil,'" he said, referring to a comment by former U.S. President George W. Bush, who once used that term to describe countries including Iran, Iraq and North Korea.

Macron also said he would only visit Iran if there was a return to calm and respect for freedoms.