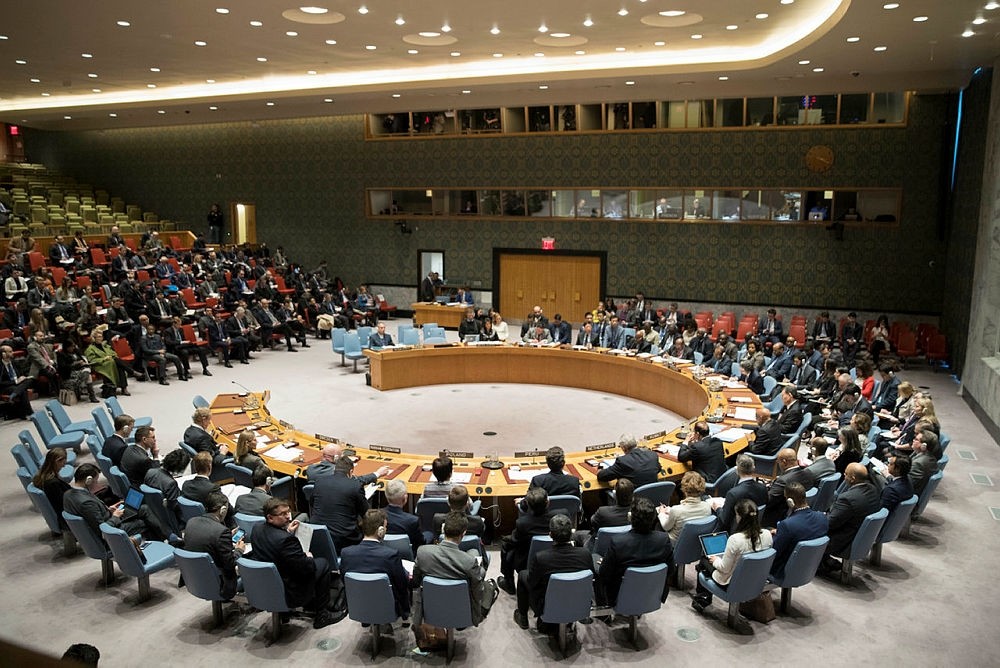 The United Nations Security Council meets on the situation in Iran, Friday, Jan. 5, 2018 at United Nations headquarters. (AP Photo)
by Compiled from Wire Services Jan 06, 2018 12:00 am

A U.N. Security Council emergency meeting on the protests roiling Iran showed Tehran "the world will be watching" its actions, the U.S. ambassador said Friday. But Russia and some other countries said the U.N.'s most powerful body had no business weighing in on the demonstrations.

The U.S. called the meeting after giving moral support to the anti-government protesters in a week of demonstrations and counterdemonstrations.

U.S. President Donald Trump and members of his administration have praised the anti-government demonstrators as people standing up to a repressive and corrupt regime that is trying to silence them.

"The world should applaud their courage" and amplify their message, said U.N. Ambassador Nikki Haley, portraying the protests as a human rights issue that could spill over into an international problem. "The Iranian regime is now on notice: The world will be watching what you do."

But Russia and Iran complained tartly that the U.S. was dragging a council focused on international security into what they called a domestic matter.

"The United States is abusing the platform of the Security Council," said Russian Ambassador Vassily Nebenzia, whose country has close ties to Iran. "Let Iran deal with its own problems."

France's ambassador said the protests do not threaten international peace and security, in what may be an implicit criticism of the U.S.

"We must be wary of any attempts to exploit this crisis for personal ends, which would have the diametrically opposed outcome to that which is wished," Ambassador Francois Delattre said. "However worrying the events of the last few days in Iran may be, they do not constitute per se a threat to international peace and security."

Delattre urged the council to react carefully, "with all the vigilance required ... but guarding against any exploitation of this crisis, which would only reinforce the extremes."

Envoys from several other countries, from China to newcomer Equatorial Guinea, expressed reservations about whether the council was the right forum for the issue.

The U.N. charter empowers to the council to "investigate any dispute, or any situation which might lead to international friction," and the U.S. wasn't alone in thinking the Iranian protests qualified.

"It is right and proper — indeed, our responsibility ... to assess whether a situation like this could become a threat to international peace and security," British Ambassador Matthew Rycroft said before the meeting.

The Netherlands' ambassador, Karel van Oosterom, called on the Iranian government to set up a process to address any serious human rights violations and hold accountable anyone involved.

At least 21 people have been killed and hundreds arrested amid the anti-government protests and unrest over the country's economic woes. Up to 42,000 people took part in the protests, according to Interior Minister Abdolreza Rahmani Fazli, who has said the government exhibited "tolerance" toward the demonstrations.

Meanwhile, tens of thousands of people have attended pro-government rallies in recent days. Authorities say the anti-government protests are waning.

Iran's U.N. Ambassador Gholamali Khoshroo told the Security Council that his government has "hard evidence" that recent protests in Iran were "very clearly directed from abroad."

Khoshroo also said the U.S. had abused its power as a permanent member of the Security Council by calling for a meeting to discuss the protests.

"It is unfortunate that despite the resistance on the part of some of its members, this council has allowed itself to be abused by the current U.S. administration in holding a meeting on an issue that falls outside the scope of its mandate," he said.

Iran's prosecutor general, Mohammad Jafar Montazeri, alleged Thursday that an American CIA official was the "main designer" of the demonstrations. And Iranian Ambassador Gholamali Khoshroo — whose country isn't a Security Council member but was invited to participate Friday — said the protests had gotten "direct encouragement by foreign forces including by the president of the United States."

The Trump administration has denied having any hand in the demonstrations, saying they arose completely spontaneously. The CIA declined to comment.

The president has tweeted to commend the protests, expressing "such respect for the people of Iran as they try to take back their corrupt government" and pledged "great support from the United States." He also has described Iran as "failing at every level" and declared it is "TIME FOR CHANGE!"

Trump vowed as a candidate to tear up the 2015 nuclear deal in which world powers lifted some sanctions in return for Iran curbing its nuclear program. He refused this past fall to certify Iran's compliance with the pact, saying the benefits to Iran were disproportionate to the concessions it made.