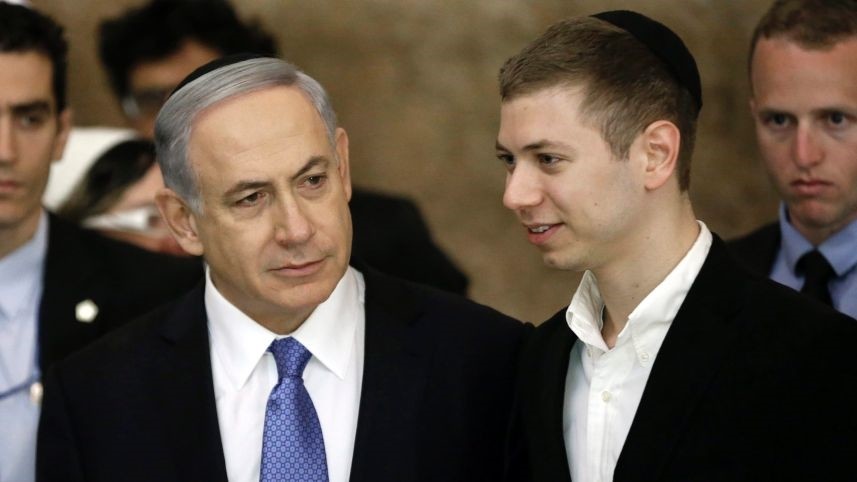 Israel's embattled Prime Minister Benjamin Netanyahu faced a new scandal Tuesday after a recording emerged of his 26-year-old stay-at-home son joyriding at taxpayer expense to Tel Aviv strip clubs with his super-rich buddies and bragging about how his father pushed through a controversial gas deal.

The 2015 recording, aired Monday night on Israel's top-rated news broadcast, sparked public outrage over its misogynistic content and raised questions over why a state-funded bodyguard and driver were necessary to facilitate such debauchery. The often combative younger Netanyahu issued a quick apology, saying the remarks did not represent the values he was raised on and were made under the influence of alcohol.

But the fallout was swift. A pair of opposition lawmakers appealed to the attorney-general to investigate Yair Netanyahu's security needs, saying it was "disgraceful that public funds fuel a culture of women's exploitation." Others piled on. "Even big kids say what they hear at home," said Eitan Cabel of the opposition Labor party.

In the recording, Netanyahu and his friends recount their night out on the town and make disparaging comments about strippers, waitresses and other women, including one of Netanyahu's former girlfriends.

He is also heard drunkenly bragging to the son of an Israeli oil tycoon about how the prime minister advanced a bill in parliament that the younger Netanyahu appears to believe delivered billions of dollars to his friend's father — an embarrassing blow to the premier, who stands accused of accepting a fortune's worth of cigars and champagne from rich supporters.

At one point, Yair Netanyahu cryptically refers to 400 shekels (about $115) paid to a prostitute. "Speaking of prostitutes, what's open at this hour?" he asks his friends, before they settle on a well-known bistro. "It's possible the waitresses there go with the flow," he adds.

One of his buddies, Roman Abramov, even jokes that the security guard, who was privy to the banter, would have to be killed if he ever left his job so the conversation wouldn't leak.

Most of the public outcry, however, involved the younger Netanyahu's comments to the son of Israeli tycoon Kobi Maimon about how the prime minister advanced a controversial gas deal in parliament that benefited his father.

"My dad arranged $20 billion for your dad, and you're whining with me about 400 shekels," Yair Netanyahu says, referring to money he borrowed in a strip club.

Adding to the public anger was the fact that the salacious outing took place on the eve of the Jewish Sabbath — and was aired just as Netanyahu's government was passing unpopular legislation to curb business on the Sabbath under pressure from ultra-Orthodox Jewish coalition partners.

The prime minister, who has repeatedly attacked the media as his legal troubles have mounted, issued a typical response after the recordings were released, calling them the height of a media-orchestrated witch hunt aimed at ousting him and saying the press had stooped to unprecedented "persecution, bloodletting and shaming."

"We have no intention of addressing the cheap and malicious gossip regarding snippets of jokes that were made after a night of drinking that don't reflect Yair's positions and were taken out of context from an illegal and tendentious wiretap," read a statement from the family.

But on Tuesday, Netanyahu softened his rhetoric, saying that his son's comments were the result of alcohol consumption and that he was raised to respect women.

The Netanyahu family's perceived hedonism and sense of entitlement has gotten them in trouble before, with repeated inquiries into their conduct. Israeli police say the prime minister is suspected of fraud, breach of trust and bribes in a pair of cases.

One involves reportedly more than $100,000 worth of cigars and liquor that Netanyahu and his wife, Sara, received from Hollywood producer Arnon Milchan, who is said to have asked Netanyahu to press the U.S. secretary of state in a visa matter.

Yair Netanyahu has also repeatedly drawn criticism for living a life of privilege at taxpayers' expense, hobnobbing with ultra-rich donors and making crude social media posts, all while never holding down a job.

Australian billionaire James Packer has reportedly lavished the younger Netanyahu with gifts that included extended stays at luxury hotels in Tel Aviv, New York and Aspen, Colorado, as well as the use of his private jet and dozens of tickets for concerts by Packer's former fiancee, Mariah Carey. Police are trying to determine whether these constitute bribes, since Packer is reportedly seeking Israeli residency status for tax purposes.

Israel's Channel 2 News, which broke the story of the latest scandal on Monday, said that Yair Netanyahu ended the evening with his friends by staying at Packer's luxury residence in Tel Aviv.

In further comments Tuesday, the premier said he had no connection to Maimon and was unaware of their sons' friendship. He added that his son had no knowledge of the gas deal and that his own backing of expanded natural gas extraction did nothing to benefit Maimon.

He also accused a disgruntled driver in the prime minister's office of making the illicit recording and attempting to sell it for a profit — and demanded that Channel 2 disclose how much it paid for it.

Yair Netanyahu has previously sparked controversy by posting an anti-Semitic caricature aimed at his father's critics, vulgarly confronting a woman who criticized him for refusing to pick up after his family's dog at a public park, and lashing out on Facebook at a liberal think tank with emojis of a middle finger and a pile of excrement.

Yediot Ahronot columnist Sima Kadmon said that despite his apology, the recordings show exactly what kind of person the younger Netanyahu is.

"A 26-year-old who does not work and lives at the state's expense. A young man who drags after him, 24 hours a day and seven days a week, an entire array of bodyguards that costs the Israeli public millions ... and behaves like a spoiled and pampered child," she wrote.

The new recordings may not directly harm the prime minister politically — but they add another blow to his battered public image after nearly nine years in office.

"It turns out that this barrel has no bottom," wrote Haaretz's Yossi Verter.