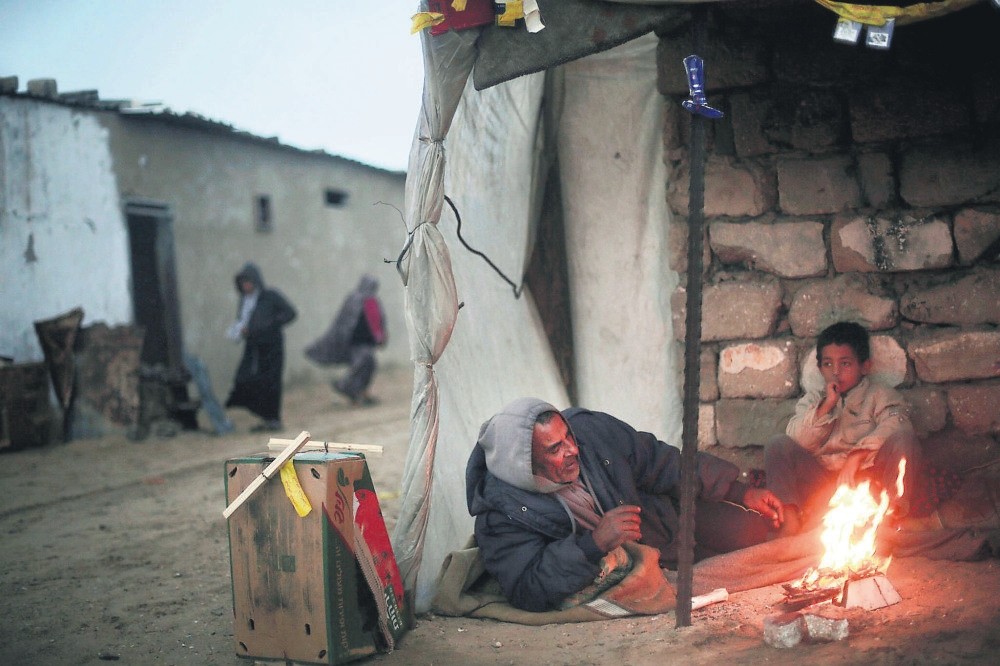 A Palestinian man and his son warm themselves during cold, rainy weather in a slum on the outskirts of the Khan Younis refugee camp, southern Gaza Strip, Jan. 5.
by Yusuf Selman İnanç Jan 10, 2018 12:00 am

The people of Palestine, who have been victimized by regional competitions between different actors, now face the threat of having their health and education facilities shut down as Israel and Trump call for freezing aid to the UNRWA

Due to the power struggle between the Gulf countries, primarily the United Arab Emirates and Iran over Gaza, its residents had been suffering from energy shortages. The UAE had conditioned Hamas to hand over the rule to Fatah, which is mainly responsible for delivering electricity and oil to the embargoed city, and it promised to open a new power plant – as the old one was targeted by Israel in 2006 – that would be sufficient to supply the entire energy needs.

Due to the lack of an energy supply, people are predominantly relying on gasoline-fueled generators and solar panels to keep their refrigerators cool and to have access to hot water. Considering that oil prices are high due to the blockade, Gazan people are in a dire situation. Therefore, hundreds of people engaged in a protest against Israel and the Palestinian Authority as international rights groups warn that there might be a total collapse of basic services. With only three hours of electricity available per day, the U.N. warned that half of Gaza's population is in need of humanitarian aid. Israel said it would reduce electricity supplies after the Palestinian Authority limited its payments for power.

Now, the displaced Gazans who live in refugee camps may face the cutting of education and health services that depend on the foreign aid. On Friday, the Axios webpage reported that the U.S. had frozen $125 million in funding for a U.N. agency that provides aid to Palestinian refugees.

"The sum, a third of the annual U.S. donation to the United Nations Relief and Works Agency was supposed to be delivered by Jan. 1," the webpage reported. However, a U.S. official, though making ambiguous statements, told Reuters that any decision as such had not been taken.

Netanyahu's support for Trump indicated that the U.S. decision to freeze the aid would not be improbable. "Netanyahu said on Sunday that he 'completely agrees' with President Donald Trump's critique of the U.N. agency aiding Palestinian refugees, saying that the UNRWA only perpetuates the problem and should cease from operating in the region. Speaking at his weekly Cabinet meeting, Netanyahu also reiterated his support for Trump's threat to cut aid to the Palestinians. The remarks came after Israeli media reports indicated that despite its public declarations, Israel was actually concerned about the ramifications of such a move," an Associated Press report wrote.

"The UNRWA is an organization that perpetuates the Palestinian refugee problem. It also perpetuates the right of returning the narrative in order to eliminate the state of Israel. Therefore, the UNRWA must become a thing of the past," Netanyahu said. "The U.S. is the largest donor to the UNRWA and ending its aid could have a particularly damaging effect in Gaza, where the majority of residents are eligible for its services. Critics have warned that thousands of children could turn to Hamas schools, for example, if the UNRWA schools are forced to close. The U.S. donated $355 million to the UNRWA in 2016, nearly 30 percent of its total funding. A large portion of the organization's activity is focused on providing health care, education and social services to Palestinians in the West Bank, Gaza Strip, Jordan, Syria and Lebanon," the AP report said.

Similarly an Agence-France Press (AFP) report said, "Many analysts, including Israelis, warn that closing the agency without having an effective replacement could lead to further poverty and perhaps violence." However, a UNRWA official, Sami Mushasha, in a series of tweets said the UNRWA would continue providing the facilities until the international community found a solution. "The UNRWA is assigned by the General Assembly to continue its services until a fair solution to the Palestinian refugee issue is reached," he said.