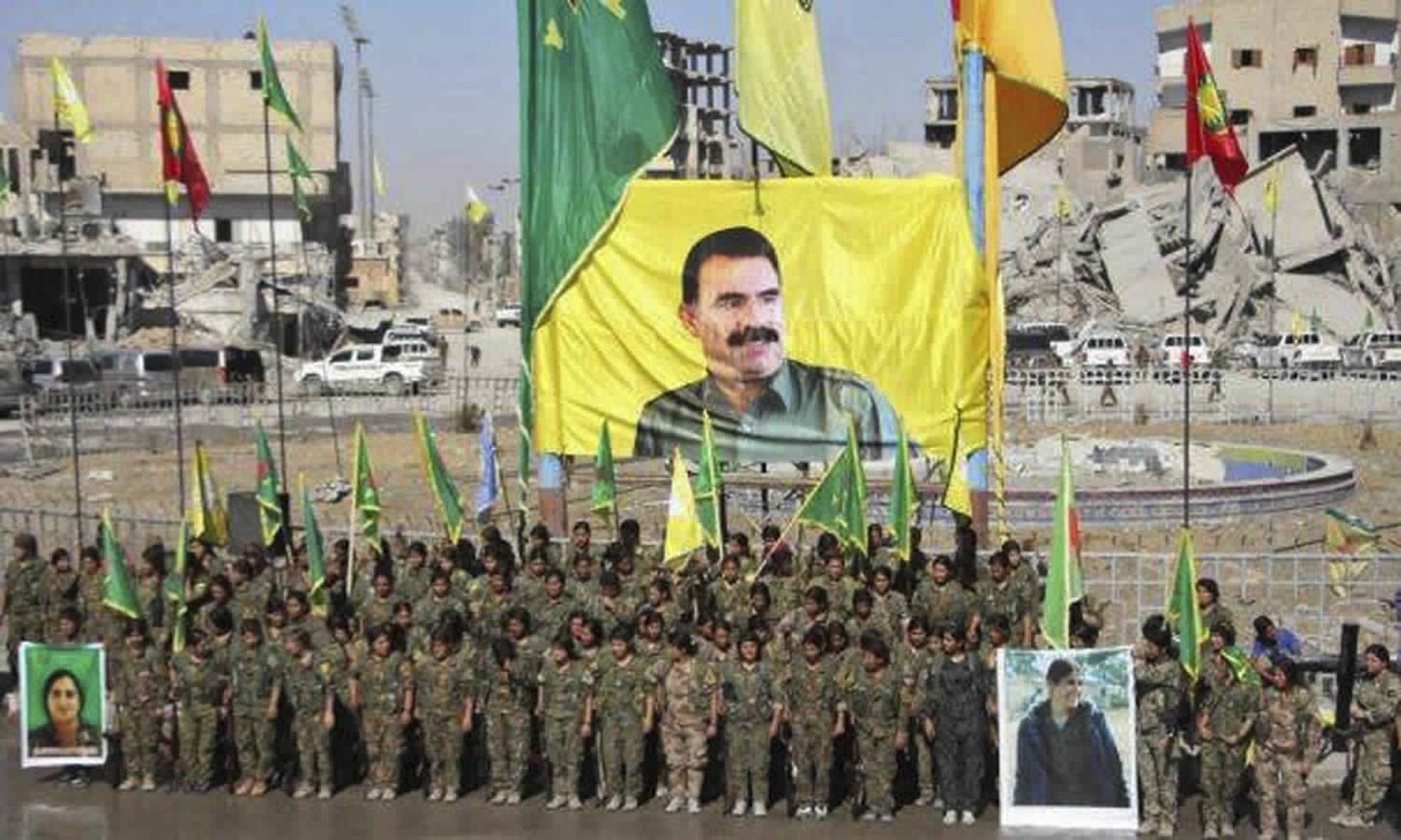 YPG members stand under a portrait of their PKK Abdullah Ocalan, as they celebrate victory against Daesh in Raqqa, Syria.(Ronahi TV, via AP)
by Ragıp Soylu Jan 11, 2018 12:00 am

The U.S. Defense Department clarified its initial statement which appeared to acknowledge connections between U.S. partner forces in Syria and the PKK, a U.S.-designated terror group. Pentagon Spokesman Eric Pahon claimed the Daily Sabah headline was a misinterpretation of the provided statement, "which was taken out of context" .

Pahon said: "What I said in my statement was that we acknowledge Turkey's stated concerns regarding the PKK, and have taken measures to mitigate those concerns. In essence, we have listened to our ally, and we have taken our ally's concerns to heart and considered them in our planning processes. The PKK is a designated Foreign Terrorist Organization which we do not support. "

Earlier today Pahon released the following statement which could be interpreted as an official acknowledgment of the connection between PKK and its Syrian armed wing YPG:

"We recognize Turkey's security concerns about connections between the PKK and the YPG. Turkey is a key NATO ally and we will continue to stand by Turkey in its counter-terrorism priorities, especially its fight against the PKK,"

He was responding to a question regarding Turkish Foreign Ministry's concerns on recent border security training provided to YPG.

The ministry summoned U.S. Charge D'affaires Phil Kosnett on Wednesday following an Anadolu Agency report saying that a group of 400 fighters from the YPG-led Syrian Democratic Forces has been trained as border guards. The group, "named as the North Army by the PKK, was provided with technical training as well as military training and 'high-tech equipment,'" according to the report.

Pahon refused to provide details of the training given to so-called "North Army," but added that the Pentagon has maintained full accountability and transparency with the Turkish government over the aid granted.

Turkey has been pointing out the fact that People's Protection Units, known as YPG, is a PKK branch in Syria. Former president Barack Obama's administration had decided not to recognize this connection despite Turkish protest, considering YPG the best option against Daesh in Syria.

Previously in April 2016, Senator Lindsey Graham forced former Secretary of Defense Ash Carter to accept that the PKK and the YPG were aligned.

"Yes," replied former Secretary Carter when Sen. Lindsey Graham (R-SC) asked whether he believed the Syrian Kurds are "aligned or at least have substantial ties to the PKK."

Since then the U.S. State Department has not designated YPG as a terror group. Furthermore, last spring President Donald Trump decided to directly arm YPG to remove Daesh from the Syrian town Raqqa.