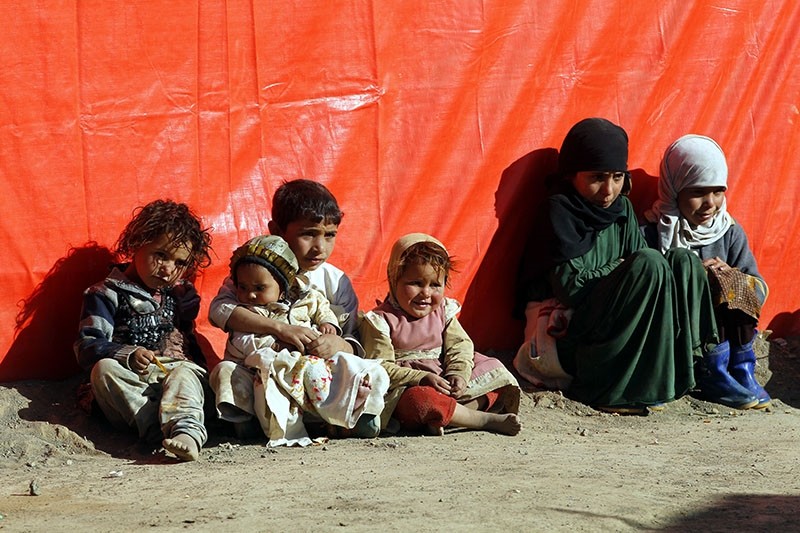 Displaced Yemeni children sit outside a makeshift shelter exposing themselves to the sun light to try and keep them warm at a camp for Internally Displaced Persons (IDPs) in the northern province of Amran, Yemen, Jan. 10 2018. (EPA Photo)
by Jan 16, 2018 12:00 am

More than three-quarters of Yemenis are now in need of humanitarian aid as the war between rebels and the Saudi-backed government nears its fourth year, the United Nations said on Tuesday.

A total of 22.2 million people, or 76 percent of Yemen's population of 29 million, are dependent on some form of assistance, an increase of 1.5 million people over the past six months.

The United Nations' efforts to address what it has described as the world's worst humanitarian crisis have been hampered by a crippling blockade of rebel-held ports by the Saudi-led coalition that intervened in support of the beleaguered government in March 2015.

Following a rebel missile attack on Riyadh airport in November, the coalition halted even U.N. aid deliveries but it has since eased that measure.

On Monday, a ship carrying four U.S.-purchased mobile cranes that had been blocked by the coalition for months docked in the main rebel-held port of Hodeida.

Around 70 percent of Yemen's imports pass through Hodeida and U.N. spokesman Stephane Dujarric said the cranes will "significantly boost the discharge of humanitarian cargo."

"This will allow for faster delivery of relief items for Yemeni families in the grips of the world's biggest hunger crisis," he said.

But U.N. aid officials warn that access for humanitarian deliveries remains a concern even if the blockade is lifted.

A total of 9,245 people have been killed in Yemen since the coalition intervened in 2015, according to World Health Organization figures.

More than 50,000 have been wounded and millions displaced from their homes.

As Yemen's health care system has been brought to the brink of collapse, more than one million people have been infected with cholera, of whom more than 2,000 died, according to the International Committee of the Red Cross.