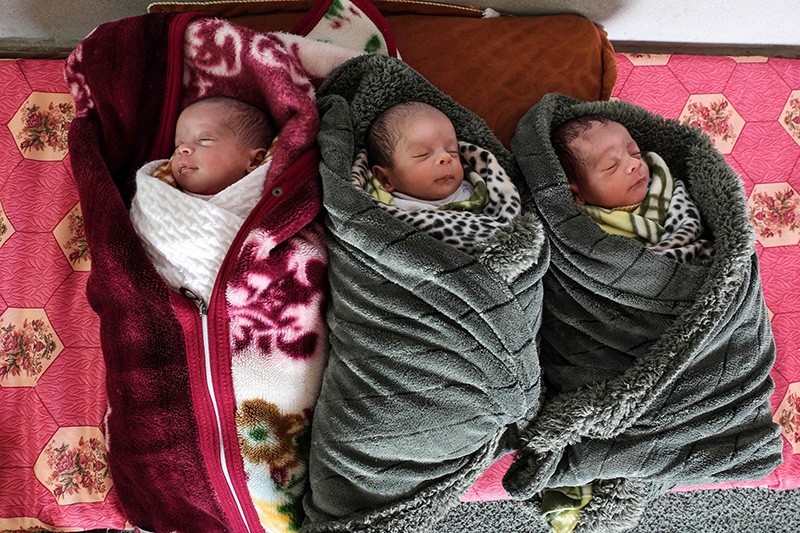 A picture taken Feb. 2, 2018, shows three Palestinian newborn triplets of the al-Saiqli family, named (R to L) ,Quds, (Arabic for Jerusalem), ,Palestine,, and ,Capital,, as they lie sleeping in the southern Gaza strip city of Khan Yunis. (AFP Photo)
by Daily Sabah with AFP Feb 02, 2018 12:00 am

Palestinians have reacted to Donald Trump's recognition of Jerusalem as Israel's capital with street protests, but one couple has come up with an idea of their own, in the naming of their triplets.

Nidal and Islam al-Saiqli from Khan Yunis in the Gaza Strip decided to name the three children Jerusalem, Capital and Palestine.

Palestinians also see the disputed city as their capital, and Trump's Dec. 6 recognition broke with decades of international policy that the issue should be resolved through negotiations.

The three babies -- boys Jerusalem and Palestine, and girl Capital -- were born in December, two weeks after the Trump decision.

"Thank God, I had triplets so we were able to name them in response to Trump's decision," said mother Islam, 25.

"There is no value to the Trump decision. Jerusalem is our eternal capital," her husband Nidal, 30, said

To illustrate the names, the couple arranges the three tiny sleeping children on a bed with their birth certificates on their stomachs.

On Dec. 6, the U.S. president recognized Jerusalem as Israel's capital, prompting widespread condemnation across the region and angry demonstrations in the Palestinian territories.

Israel seized Jerusalem in the 1967 Six-Day War and later annexed it, in moves never recognized by the international community.

The city remains at the heart of the Middle East conflict, with Palestinians hoping that East Jerusalem might eventually serve as the capital of a Palestinian state.