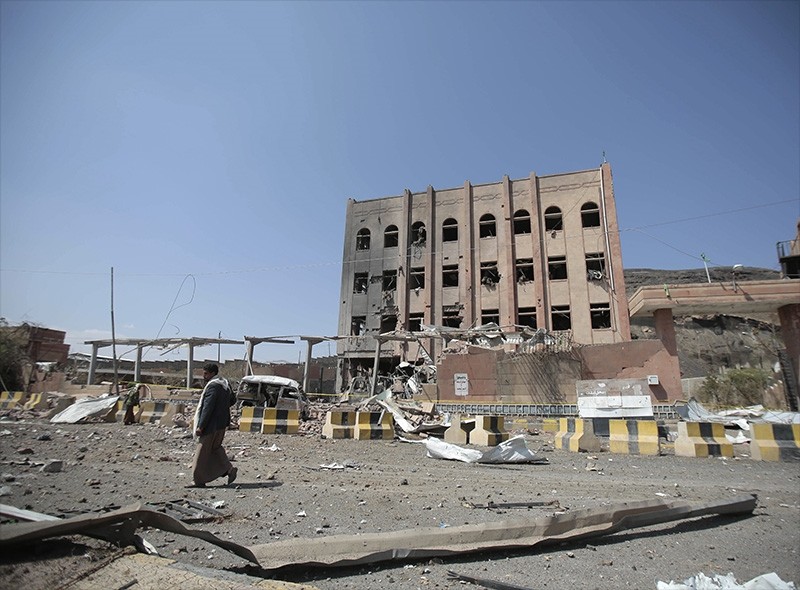 An air raid hit the criminal investigations unit in Yemen's moderate opposition-held capital Sanaa on Sunday as opposition forces battle the government, backed by a Saudi-led coalition, for control of the country.

The four-story building and a line of police cars parked outside were largely destroyed in the attack.

The Iran-backed Houthi opposition blamed the attack on the Saudi-led military coalition that has been fighting to prop up the Yemeni government since March 2015.

Opposition-run Yemeni media said seven people were killed and 58 wounded in the Sunday attack. The toll could not be independently confirmed.

A spokesman for the coalition said the military alliance was investigating the raid. He did not comment on the toll.

"We take this report very seriously and it will be fully investigated, as all reports of this nature are, using an internationally approved, independent process," the spokesman said.

"Whilst this is ongoing, it would be inappropriate to comment further."

The coalition, the only party known to regularly operate air raids on Sanaa, was blacklisted by the U.N. for the killing and maiming of children in air raids on Yemen.

The Houthis, who hail from northern Yemen, in December claimed full control of Sanaa, three years after they forged an agreement with strongman Ali Abdullah Saleh to jointly rule the capital.

Saleh was killed in the December Houthi takeover after their alliance fell apart.

In November, a rival criminal investigations unit in the government stronghold of Aden was struck in a suicide attack.

Gunmen stormed the crime unit and set files and archives on fire as a suicide bomber detonated an explosive belt at the building's entrance.

More than 9,200 people have been killed since the Saudi-led alliance joined the Yemen war, according to the World Health Organization, triggering what the United Nations has called the world's worst humanitarian disaster.