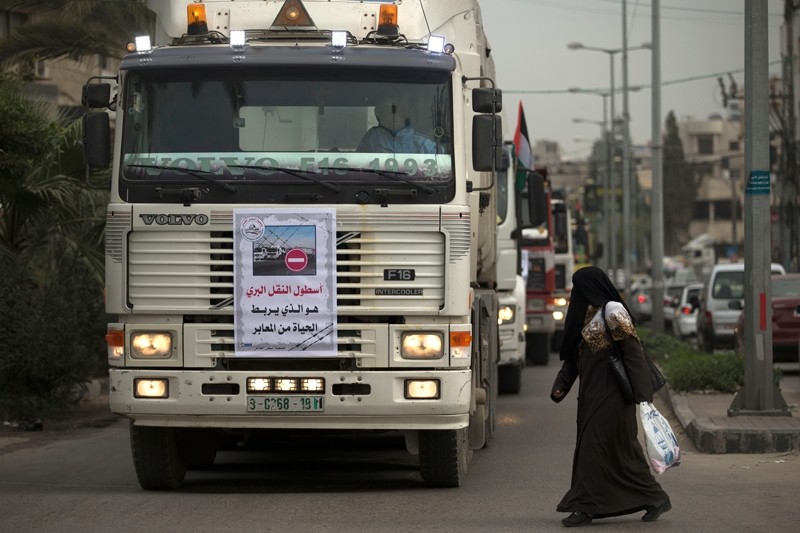 Palestinian truck drivers take part in a protest against the siege on the Gaza Strip, on February 6, 2018 in Gaza City. (AFP Photo)
by Compiled from Wire Services Feb 06, 2018 12:00 am

Dozens of truck drivers prevented goods from entering the Gaza Strip from Israel on Tuesday in a day-long protest at the humanitarian situation in the Palestinian enclave.

The trucks belonging to Gazan businesses blocked the roads near the Kerem Shalom crossing into Israel, the main entry point for imports into Gaza, in a protest organized by private sector associations.

Gaza's only functioning commercial crossing, Kerem Shalom links the strip -- which for 10 years has groaned under a crippling Israeli/Egyptian embargo -- to Israel.

Nahed Shuhibar, head of the Gaza's Private Transport Association, said more than 50 trucks were being used in the protest.

"Our message is that we have children and families who want to live," he said.

Speaking to Anadolu Agency, Maher al-Tabaa, a spokesman for Gaza's private sector, said that almost all of Gaza's traders and businessmen had jointly decided not to receive incoming goods on Tuesday.

The move, he said, was intended to deliver the message that "the time has come to lift the blockade on Gaza".

Around 150 protestors took part in the demonstration. Many held signs condemning Israel and calling for reconciliation between rival Palestinian factions Hamas and Fatah, which many hope could help ease conditions in Gaza.

Gaza suffers from around 40 percent unemployment and more than two-thirds of its two million residents rely on international aid, according to the United Nations.

Israel regulates all commercial traffic through the crossing, typically subjecting it to stringent security measures with the ostensible aim of preventing commodities with military uses from entering the strip.

Israel has maintained a crippling blockade on the coastal territory for a decade, while Egypt has also largely sealed its border in recent years.

The UN's envoy for the Middle East peace process warned last week that the enclave was on the verge of "full collapse."

Palestinian president Mahmud Abbas's secular Fatah party based in the occupied West Bank and Gaza's Hamas agreed a reconciliation deal in October, but its implementation has faltered.

Two weeks ago, private sector companies in Gaza organized a general strike to protest economic conditions in the strip.

Home to more than two million Palestinians, the Gaza Strip has groaned under the Israeli/Egyptian embargo since 2007, when Hamas wrested control of the coastal enclave from forces loyal to the Ramallah-based Palestinian Authority.