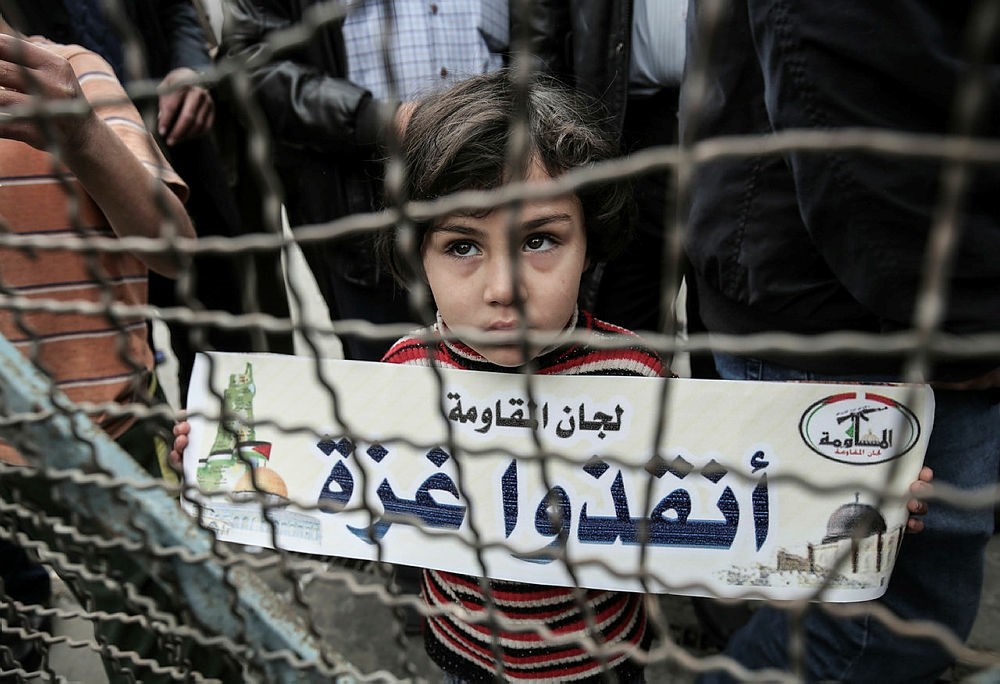 Palestinians take part in a protest against the U.S. move to freeze funding for the U.N. agency for Palestinian refugees (UNRWA) at the Rafah refugee camp in the southern Gaza Strip, Feb. 6, 2018. (AFP Photo)
by Compiled from Wire Services Feb 09, 2018 12:00 am

One month after the Trump administration announced a drastic funding cut to the U.N. agency for Palestinian refugees, only one country, Kuwait, has stepped forward to offer additional funding, senior UNRWA officials said Friday.

The United States announced in January that it would give $60 million to UNRWA — a fraction of the more than $350 million annual contribution that it has provided to the agency's budget.

Kuwait stepped in to contribute $900,000 and about 15 donor countries including Sweden and Japan decided to speed up their donations to keep UNRWA afloat, said Peter Mulrean, UNRWA's representative in New York.

But Mulrean told reporters at U.N. headquarters that the agency was facing an "existential financial crisis" as it seeks to fill the gap from the U.S. funding cut.

The U.S. is the biggest single donor to UNRWA which provides schools and health clinics to 5.3 million refugees in the Palestinian territories, Jordan, Lebanon and Syria.

U.S. Ambassador Nikki Haley last month said the United States would not provide aid to the Palestinians until they agree "to come back to the negotiation table" and reach a peace deal with Israel.

"The U.S. has not yet explained to U.S. the rationale behind its decision on the $60 million," Mulrean said, adding that Washington had not presented any concerns about reforms.

In an interview to Voice of America, Haley said UNRWA needed to be reformed, becaU.S.e they consider "any Palestinian as a refugee" and "what they're teaching in schools is not necessarily the right way to have things run."

UNRWA has been repeatedly accU.S.ed of promoting anti-Israel sentiment in schools, a charge it has flatly rejected.

U.N. Secretary-General Antonio Guterres will attend a ministerial-level donors' conference for UNRWA to be held next month in Geneva to fill the gap in funding, but it remains unclear if the United States will attend.

UNRWA's director for the West Bank, Scott Andersen, said all of the agency's services remain up and running for the time being, but that the decision had left many Palestinians anxioU.S..

"People are frightened and concerned about what this means for them, their families and their future," he said.

Anderson, a former U.S. Army major, stressed that UNRWA has no political role and is a U.N. humanitarian organization that helps the impoverished civilians and youngsters needing education.

He responded to a questioner alleging that Palestinian students in UNRWA schools are taught that Israel doesn't exist and isn't on the map and that "Jews are hateful people" saying: "We certainly do not teach hatred for anyone and we do not teach that Israel does not exist."

Anderson added that he speaks to the Israeli army almost every day and a general tweeted last year "praising UNRWA for the work they're trying to do around the curriculum."

But Trump's action has sparked UNRWA's biggest-ever financial crisis, and it is seeking $800 million for emergency operations in Syria, the West Bank and Gaza Strip this year.

Anderson said "it's far too early to talk about the consequences of underfunding," stressing that "our operations remain viable."

But in the West Bank, he said Palestinians are quite concerned about the funding cuts as well as Trump's declaration of Jerusalem as the capital of Israel and continued Israeli settlement building.

"They see this also, without perhaps defining it as such, as an existential threat to them and their future," Anderson said. "It's a combination of fear of the decisions that have been taken, fear of what may be coming in the future, and trepidation of what all that means to them at this point in time."

But Anderson said he wants to focus less on consequences and more on increasing income.

In addition to the ministerial conference, he said UNRWA has launched a campaign for individual donors called "dignity is priceless."