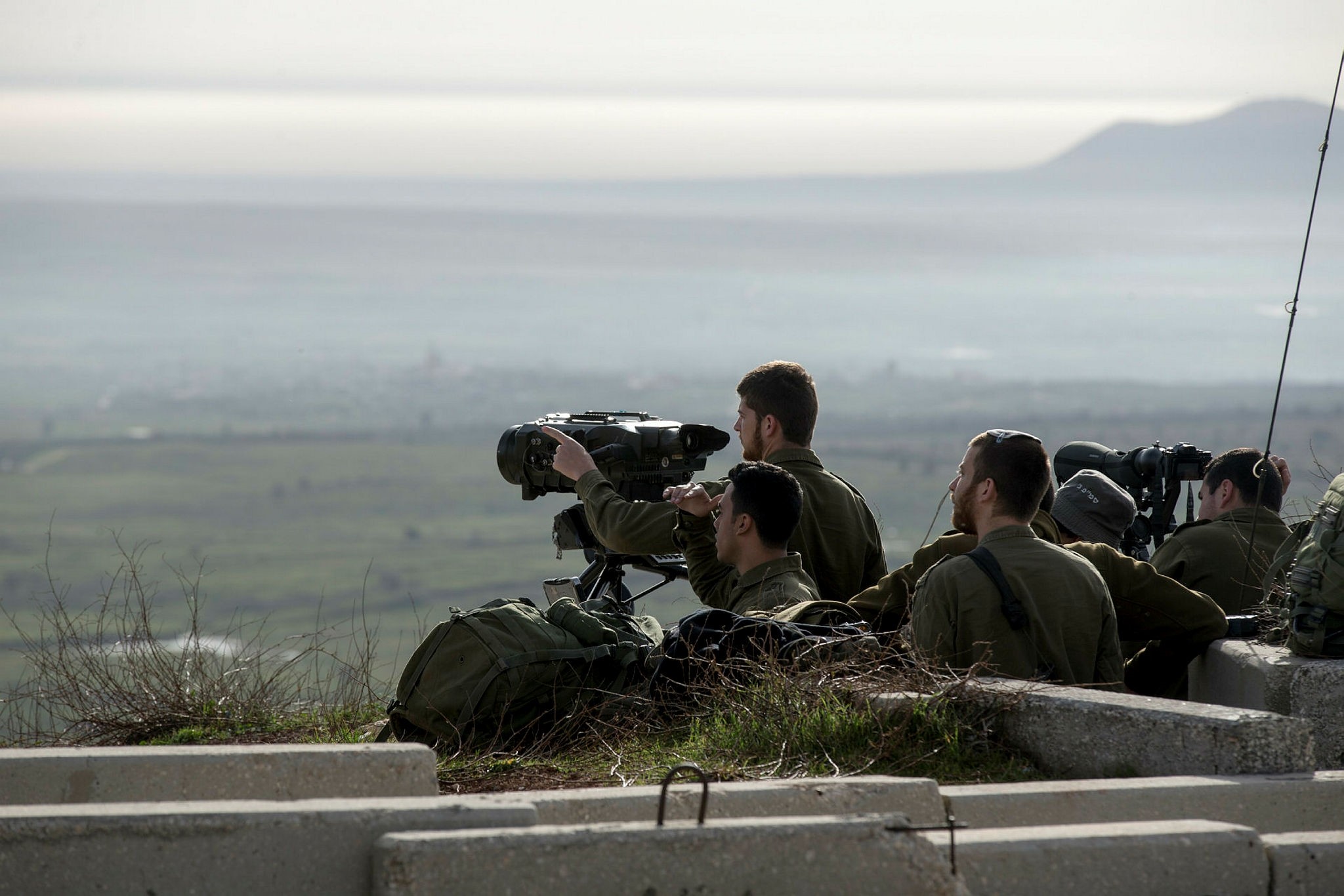 Israeli soldiers take positions next to the Israeli-Syrian border following the Israeli attack in Syria, Feb. 10.
by Daily Sabah with Wires Feb 12, 2018 12:00 am

Israel targeted Iranian positions inside Syria after one of its F-16s was downed, making it the most serious confrontation between the two arch-rivals since the war there erupted almost seven years ago

In its most serious confrontation with Iran since the Syrian war began in 2011, Israel shot down an Iranian drone Saturday and struck Iranian targets deep in Syria before one of its own jets was downed.

In Saturday's attacks, Israeli jets came under heavy Syrian anti-aircraft fire and the pilots of one of the F-16s had to eject before the plane crashed in northern Israel. One pilot was seriously wounded and the other escaped with light injuries. Israel would not confirm whether its aircraft was actually shot down by enemy fire, which would mark the first such instance for Israel since 1982 during the first Lebanon war.

Israel's prime minister said yesterday his country delivered "severe blows" to Iranian and Syrian forces and vowed to take further action against its adversaries, as reported by the AP.

United Nations Secretary-General Antonio Guterres called on Saturday for an immediate de-escalation in Syria after Israel carried out raids inside the war-torn country. Guterres is "following closely the alarming military escalation throughout Syria and the dangerous spillover across its borders," U.N. spokesman Stephane Dujarric said in a statement.

"It is absolutely unacceptable to create threats to the lives and security of Russian servicemen who are in Syria at the invitation of its legitimate government," it said. The United States, meanwhile, strongly backed Israel.

Israel is technically at war with Syria and occupies a swathe of the strategic Golan Heights that it seized in the Six-Day War of 1967 and later annexed in a move never recognized by the international community. Israel has sought to avoid direct involvement in the Syria conflict but acknowledges carrying out dozens of air strikes there to stop what it calls deliveries of advanced weaponry to Hezbollah.

Even though Israel has carried out several air raids on the Syrian regime and Hezbollah positions not just in the occupied Golan Heights but also on the outskirts of Damascus, Tel Aviv has so far avoided encountering Iran over regional conflicts. Instead, it has made several comments on Iran's pursuit of nuclear power and its tests of long-range missiles capable of carrying nuclear warheads. As long as Iran has the power to dominate Damascus and mobilize Shiite groups, there will eventually be conflict with Israel. Israel has sought to avoid direct involvement in the Syria conflict, but acknowledges carrying out dozens of airstrikes there to stop what it calls deliveries of advanced weaponry to Hezbollah.

Israel is concerned over Iran's growing influence in the Middle East, particularly in Syria and Lebanon. Israel has been targeting the Iran-backed Shiite militia group Hezbollah and regime forces in Syria with concerns that Hezbollah might target Israel at any given moment with new weapons supplied by Iran and Russia. Israel is determined to take action against Hezbollah since Iran, allegedly, intends to build a military base near the disputed Golan Heights and has been building facilities to manufacture weapons inside Lebanon.