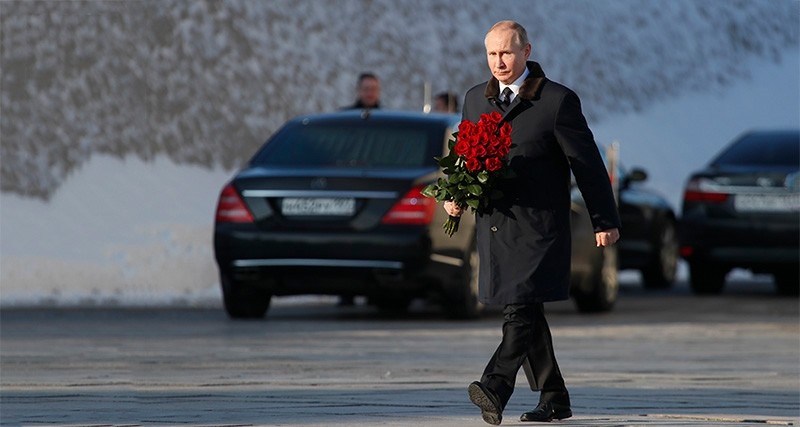 Russian President Putin hosted Palestinian leader Abbas for talks about peace efforts with the aim of fostering a peacemaker role in the Israeli-Palestinian conflict while sidelining the U.S.

The Palestinian leader was set to visit Moscow two weeks after a visit by Israeli Prime Minister Benjamin Netanyahu. The path ahead for any mediation is not straightforward as Israel has insisted that the U.S. will remain the main peace broker.

Relations between Washington and the Palestinians have been severely strained since President Donald Trump's December decisions to recognize Jerusalem as Israel's capital and to move the American embassy there. As Trump's policies appear to favor Israel more than those of his predecessor Barack Obama, Abbas has resisted, saying the U.S. "can no longer play a leading role" in peace efforts. Abbas has refused any contact with Trump's administration since Washington's recognition of Jerusalem as Israel's capital at the end of last year. Abbas is due to speak at the United Nations Security Council on Feb. 20. Palestinians see the U.S. decision, which broke years of international diplomacy, as a denial of their claim to east Jerusalem as the capital of an eventual Palestinian state. Trump is also withholding tens of millions of dollars from the United Nations Relief and Works Agency (UNRWA), the U.N. agency for Palestinian refugees.

The quartet on the Middle East, comprising of the United States, Russia, the United Nations and European Union, is no longer a relevant mediator in the peace process, Abbas said. Since 2002, a quartet of Middle East peace negotiators has been assigned to promote peace efforts but has failed to get any results.

Unlike the U.S., Russia has managed to maintain robust relations with both Israel and the Palestinian Authority government, as well as other Israeli rivals such as Syria and Iran, as Russia promotes itself as a peacemaker in Middle Eastern conflicts.

In 2016, Russia offered to host one-on-one talks without preconditions between Abbas and Netanyahu, but these never materialized.

In January, Russian Foreign Minister Sergei Lavrov estimated that the chance of resuming direct talks between the two sides in the current situation was "close to zero." Lavrov also said "we understand the emotions" Palestinians feel toward Trump. "We keep hearing in recent months that the U.S. is about to publish some 'major deal' that ... will satisfy everyone," he said. But he added that Russia "has not seen or heard of such a document or even any statement." On Nov. 29, 2012, the United Nations designated Palestine as a non-member observer state after a vote by the General Assembly. That enabled the Palestinians to join international organizations and the International Criminal Court, though they did not become a full U.N. member state. Palestinian statehood is recognized by more than 130 countries.