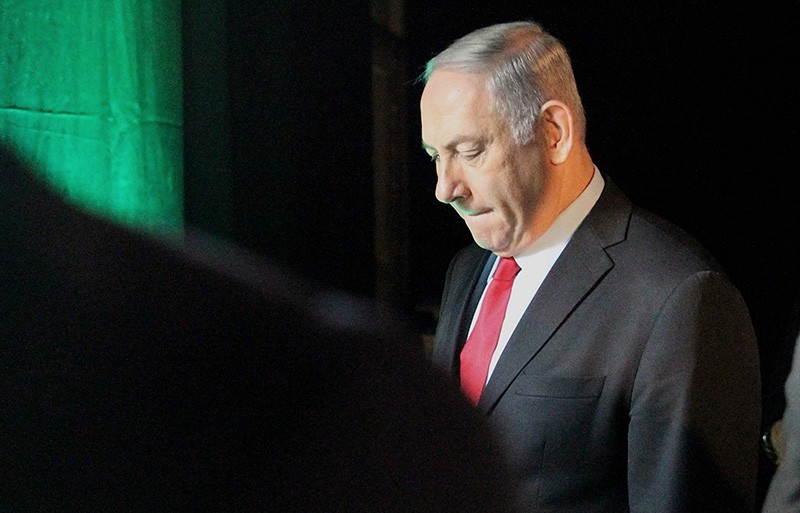 Israeli Prime Minister Benjamin Netanyahu rejected calls to step down Wednesday after police recommended his indictment for corruption, the biggest challenge yet to the right-wing premier's long tenure in power.

Netanyahu again came out swinging on Wednesday, harshly criticizing the police investigation while making clear he has no intention of resigning.

His governing coalition, seen as the most right-wing in Israeli history, appears firm for now, but reactions from key members in the coming days will be watched closely for signs of fissures.

"I can reassure you that the coalition is stable," Netanyahu said at an event in Tel Aviv.

"Neither me nor anyone else has plans for elections. We're going to continue to work together for the good of Israeli citizens until the end of the term" in 2019.

Netanyahu, prime minister for a total of nearly 12 years, also harshly denounced the police recommendations against him as "full of holes, like Swiss cheese".

He said the police report was "contrary to the truth and logic".

Police recommended Tuesday that he be indicted for bribery, fraud and breach of public trust.

The attorney general must now decide how to move forward, a process that could take months.

A prime minister facing such police recommendations or who has been formally charged is not obliged to resign.

As it became clear police were to issue the recommendations on Tuesday night, Netanyahu gave a televised address to the nation, proclaiming his innocence and criticizing the police.

Avi Gabbay, leader of the opposition Labour party, said the "Netanyahu era is over" and called on him to step down.

"He is unworthy to continue to be prime minister of Israel. It's very simple," Gabbay said in a video interview with the Ynet news site.

Tzipi Livni, part of the main opposition Zionist Union alliance that also includes Labour, criticized what she called a campaign to undermine the police.

One of Netanyahu's main rivals also came under the spotlight when it emerged he had spoken to police about one of the allegations against the prime minister.

Yair Lapid, head of the centrist opposition party Yesh Atid, said "there is no choice but to tell the truth when the police ask for explanations in a serious corruption case."

Lapid, who also called on Netanyahu to step down, was finance minister at the time one of the allegations took place.

But at the same time, key coalition ministers signaled they would remain in the government, though at least one also criticized Netanyahu's behavior.

Education Minister Naftali Bennett said "taking gifts" as Netanyahu is alleged to have done was not up to the "standard" of a prime minister.

But he stressed Netanyahu was innocent until proven guilty and that he would wait for the attorney general's decision.

Bennett, who has ambitions to be prime minister, heads the far-right party Jewish Home, which holds eight seats in parliament.

Netanyahu's coalition controls 66 out of 120 seats in total.

"Something very, very dramatic happened last night, a kind of earthquake, but as far as changes in the political arena, I don't see that yet," political scientist Abraham Diskin of Hebrew University said in an interview with The Israel Project NGO.

Police have been investigating Netanyahu over suspicions that he and his family received expensive gifts from Hollywood producer Arnon Milchan and Australian billionaire James Packer.

They have also been probing allegations Netanyahu sought a secret deal for favorable coverage with the publisher of top-selling newspaper Yediot Aharonot.

Police recommended indicting Milchan and the publisher, Arnon Moses, with bribery as well.

The 68-year-old premier has been questioned seven times by police and has called the investigation an attempt by political opponents to force him from office.

Police said Netanyahu had been suspected of trying to help Milchan receive tax benefits in Israel, of assisting him in receiving a visa in the United States and of promoting his business interests.

Milchan, who is Israeli, has produced many films, including the blockbuster "Pretty Woman."

While an indictment alone would not legally oblige Netanyahu to resign, he would likely face mounting pressure to do so. He would be legally forced to step down if convicted and all appeals exhausted.

He has already faced a series of large protests in Tel Aviv over the corruption cases.

Netanyahu's time as premier is fast approaching Israel's revered founding father David Ben-Gurion's 13 years. He first held the office from 1996-1999 before returning to power in 2009.