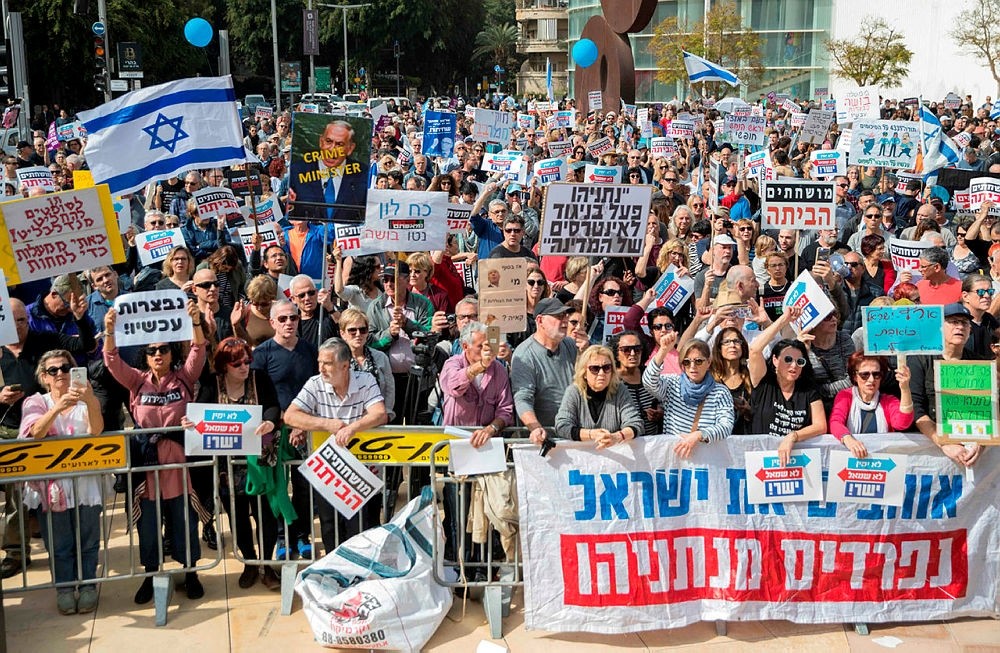 Israeli protesters raise signs as they demonstrate against Prime Minister Benjamin Netanyahu in the wake of police recommendations to indict corruption, in the coastal city of Tel Aviv on February 16, 2018. (AFP PHOTO)
by Feb 16, 2018 12:00 am

Thousands of Israelis marched against corruption in Tel Aviv on Friday, in the first protest since police recommended that Prime Minister Benjamin Netanyahu be indicted for fraud.

Several thousand people gathered for the protest calling on Netanyahu to step down, carrying banners reading 'Crime Minister' and 'Bye bye Bibi' -- a common nickname for the Israeli leader.

The crowd chanted "Liar! Liar!" when one speaker sarcastically repeated Netanyahu's common refrain about the allegations that "there will be nothing because there is nothing".

On Tuesday, police called for Netanyahu, 68, to be indicted for bribery, fraud and breach of public trust, in the biggest challenge yet to the right-wing premier's long tenure in power.

He has repeatedly denied the allegations, which he says are politically motivated, and has rejected calls to step down.

Netanyahu's partners in his coalition government have so far stood by him, and a prime minister facing such police recommendations or who has been formally charged is not obliged to resign.

"Here in this square we pledge to fight you until you resign," activist Abi Binyamin told the crowd on Friday.

"We shall keep coming here for as long as it takes."

Netanyahu is being investigated over suspicions that he and his family received expensive gifts from Hollywood producer Arnon Milchan and Australian billionaire James Packer.

Weekly anti-corruption protests have been taking place in Tel Aviv for months.

"We are fighting for the future of this country, for the sake of our children," Efrat Shechter, 50, told AFP.

"What has been happening in recent years is destroying our future."

Colette Avital, a former MP for the left-wing Labour party, told AFP the march was about more than just Netanyahu.

"(It is) against the fact that the ruling government allows itself to behave like this," she said.