‘Do not test Israel's resolve,’ Netanyahu warns with ‘piece of Iranian drone’ in hand 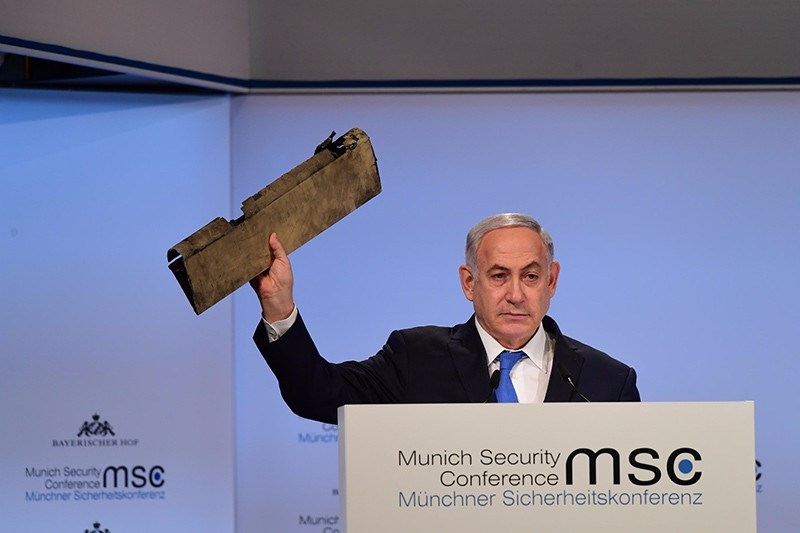 Israeli Prime Minister Benjamin Netanyahu holds out what he calls ,a piece of an Iranian drone, Israel shot down during his speech at the Munich Security Conference in Munich, Germany, Feb. 18, 2018. (Facebook/The Prime Minister of Israel)
by Compiled from Wire Services Feb 18, 2018 12:00 am

Israeli Prime Minister Benjamin Netanyahu warned Tehran on Saturday over aggressions by what he called Iran and its "proxies" in Syria, while showing what he claimed was a piece of an Iranian drone shot down in Israeli airspace.

Saying he had "a message to the tyrants of Tehran" during a speech at the Munich Security Conference, he warned: "Do not test Israel's resolve."

Netanyahu told world leaders, defense officials and diplomats at the Munich Security Conference on Sunday the agreement has "unleashed a dangerous Iranian tiger in our region and beyond."

Saying Iran's "brazenness hit new highs," he held up a fragment of what he said was an Iranian drone shot down last week by Israel in Israeli airspace and challenged Iranian Foreign Minister Mohammad Javad Zarif, who was to speak later.

Netanyahu said "Mr. Zarif do you recognize this? You should, it's yours. You can take back with you a message to the tyrants of Tehran — do not test Israel's resolve!"

"He lies with eloquence."

The Israeli military has claimed the drone was a copy of a U.S. model captured by Iran in 2011, based on an analysis of the drone's debris.

Iran's foreign minister slammed Israel's Benjamin Netanyahu for staging a "cartoonish circus" after the premier brandished what he said was a piece of an Iranian drone shot down by Israel.

"You were the audience for a cartoonish circus just this morning which does not even deserve the dignity of a response," Iran's top diplomat Mohammad Javad Zarif said at the Munich Security Conference, as he took to the stage shortly after Netanyahu's fiery speech.