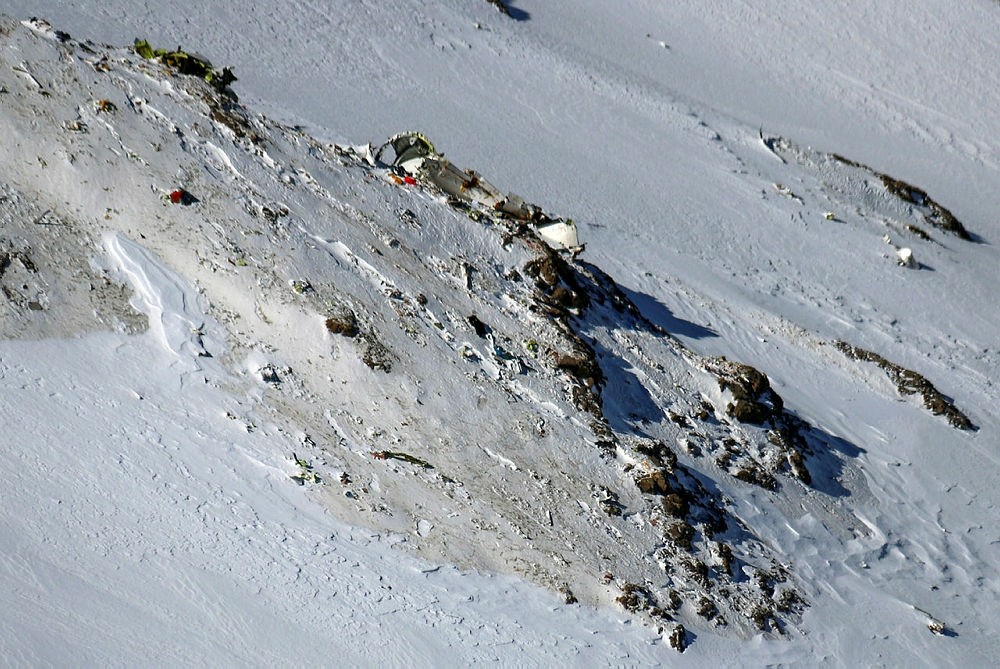 A picture shows on February 20, 2018 the wreckage of a plane that crashed near a mountain peak two days earlier in Iran's Zagros mountain range. (AFP Photo)
by French Press Agency - AFP Feb 20, 2018 12:00 am

Iranian rescue teams struggled to recover bodies on Tuesday from the wreckage of a plane that crashed in hazardous terrain near a mountain peak two days earlier with 66 people on board.

"Deep and dangerous crevices in the area of the crash have made it impossible for helicopters to land," Ghafoor Rastinrooz, director of the regional medical centre, told official news agency IRNA.

"The bodies must be transferred by hand to the foot of the mountain which will be time-consuming," he said.

Aseman Airlines flight EP3704 disappeared from radar as it flew over the Zagros mountain range on Sunday morning, around 45 minutes after taking off from Tehran on a domestic flight.

After two days of heavy snow and fog, the weather finally cleared on Tuesday morning, allowing a helicopter crew to spot a piece of the wreckage with the company's logo.

A pilot told state broadcaster IRIB he had seen "scattered bodies around the plane" and that it was located on one of the Dena mountains at a height of around 4,000 metres (13,000 feet).

Footage from the helicopter showed the wreckage almost entirely buried in snow on a sheer mountain face, while officials warned that bad weather was expected to return and could last for days.

Around 100 mountaineers have been making their way up the mountain since Monday and teams were being choppered to near the crash site.

"Little by little they have reached the area and are collecting bodies," Shahin Fathi, from Iran's Red Crescent, told state TV.

"As we're approaching sunset and the helicopters will no longer be able to fly, the teams will stay in place overnight and we will try to increase the number of teams tomorrow, although it's very difficult."

The head of the Red Crescent team, Mohammad Hossein Kobadi, told IRIB that helicopters were able to drop off equipment at the site of the crash but high winds were making the work "very dangerous and difficult" and there was an avalanche risk.

The ATR-72 twin-engine plane, in service since 1993, had gone missing while flying from the capital's Mehrabad airport towards the city of Yasuj, some 500 kilometres (300 miles) to the south.

A team of crash investigators from French air safety agency BEA was due to arrive in Iran later on Tuesday.

The incident has reawakened concerns over aviation safety in Iran, which has been exacerbated by international sanctions over the years.

Aseman Airlines was blacklisted by the European Commission in December 2016.

It was one of only three airlines barred over safety concerns -- the other 190 being blacklisted due to broader concerns over oversight in their respective countries.

Iran has complained that sanctions imposed by the United States have jeopardised the safety of its airlines and made it difficult to maintain and modernise ageing fleets.

Aseman was forced to ground many of its planes at the height of the sanctions due to difficulties in obtaining spares.

In a working paper presented to the United Nations' International Civil Aviation Organization (ICAO) in 2013, Iran said US sanctions were blocking "the acquisition of parts, services and support essential to aviation safety".

Iran has suffered multiple aviation disasters, most recently in 2014 when 39 people were killed as a Sepahan Airlines plane crashed just after take-off from Tehran, narrowly avoiding many more deaths when it plummeted near a busy market.

But figures from the Flight Safety Foundation, a US-based NGO, suggest Iran is nonetheless above-average in implementing ICAO safety standards.

Lifting sanctions on aviation purchases was a key clause in the nuclear deal that Iran signed with world powers in 2015.

The sale could still be scuppered if US President Donald Trump chooses to reimpose sanctions in the coming months, as he has threatened to do.