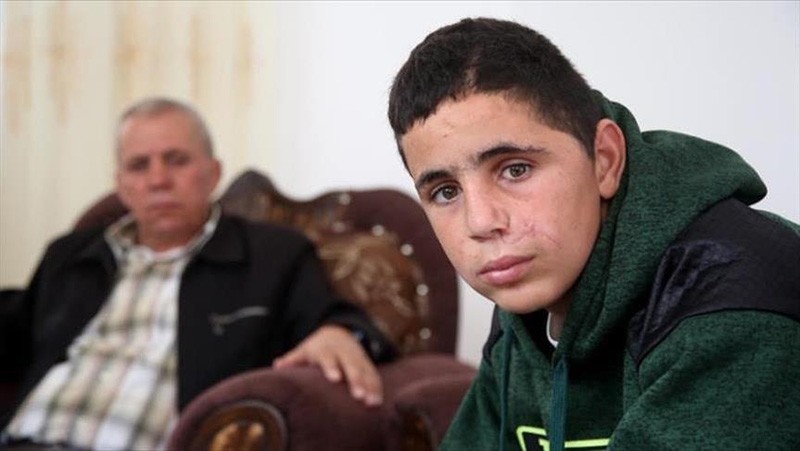 Mohammad Fadel al-Tamimi, 15, cousin of Palestinian resistance icon Ahed al-Tamimi, was released this week after being detained by Israeli authorities despite having recently suffered a severe head injury.

On Dec. 28, Mohammad was struck by a rubber-coated bullet that was fired by an Israeli soldier during clashes that erupted in his village -- Nabi Saleh -- near the West Bank city of Ramallah.

"Three months ago, I was shot by an Israeli soldier while playing near my home," he told Anadolu Agency in an exclusive interview.

"The bullet went through my jaw and exited from my head," Mohammad recalled.

He was sent to a hospital near Ramallah for two weeks where he underwent extensive surgery, during which doctors had to remove much of his scalp.

In the days ahead, he is slated to undergo a raft of additional surgical procedures.

Yoav Mordechai, the official in charge of Israeli government activities in the occupied Palestinian territories, for his part, said the army wasn't responsible for Mohammad's grave injury.

"The Tamimi child admitted that his injury was due to a bicycle fall," Mordechai wrote on his Facebook page.

"The culture of lies and incitement continues among the young and older people in the al-Tamimi family," he added.

"Medical reports and CT scans confirm -- beyond a shadow of a doubt -- that a bullet exited my son's head, causing the injury," Fadel told Anadolu Agency.

"The claims of the Israeli coordinator [Mordechai] are lies; a cheap attempt to falsify facts," he said.

"The Israeli army arrested my injured son before subjecting him to violent interrogation," Fadel said. "Then they claimed he had said that his injury was the result of a bicycle fall."

"No one with a conscience could arrest a child suffering from a grave head injury," he added. "The oppression and injustice we are suffering cannot be imagined."

As for the boy's arrest, which was met by outrage on the Palestinian street, Mohammad recalled how Israeli forces had raided his family's home at dawn Monday and arrested him and his brother.

"There I was subject to three hours of interrogation, during which I was beaten severely," he added.

The boy recalled how one Israeli officer had falsely accused him of throwing stones and Molotov cocktails at Israeli army troops.

Since he sustained his injury three months ago, Mohammad has been unable to live his life normally.

"It has kept me from playing with friends or continuing my education," he said. "I miss going to school and running through the fields with my friends."

In 2012, Istanbul's Başakşehir Municipality granted Ahed the Hanzala Courage Award for defying Israeli soldiers who had just arrested her brother.

According to Palestinian figures, over 6,400 Palestinians are now being held in Israeli prisons, including 350 children.