Trump 'may' attend US embassy opening in Jerusalem 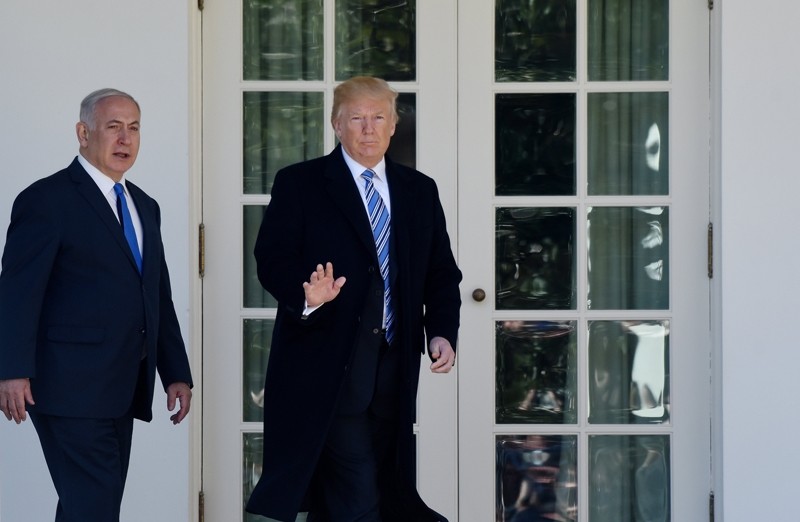 US President Donald J. Trump and Prime Minister Benjamin Netanyahu of Israel walk outside the Oval Office of the White House in Washington, DC, USA, 05 March 2018 (EPA Photo)
by Compiled from Wire Services Mar 05, 2018 12:00 am

The U.S. President Donald Trump floated a fraught trip to open the new American embassy in Jerusalem in May, as the U.S. leader hosted Israel's equally embattled Prime Minister Benjamin Netanyahu at the White House Monday.

The two leaders, both under career-threatening legal investigations, tried to cast their domestic problems aside, putting on a show of bonhomie and mutual appreciation in sunny Washington.

In the Oval Office, Netanyahu waxed lyrical, painting Trump as the heir to a pantheon of historical figures, and hailed the president's "bold" decision to move the U.S. embassy from Tel Aviv to the disputed city of Jerusalem.

Netanyahu likened the U.S. leader to the ancient Persian king Cyrus the Great, who freed the Jews from captivity in Babylon; to Lord Balfour, who a century ago affirmed the rights of the Jewish people in Palestine; and president Harry Truman, who recognized the Jewish state.

"I want to thank you for your extraordinary friendship," said the Israeli premier.

The 71-year-old president responded with some lyrical waxing of his own, saying he would consider a trip to open the controversial embassy this May, when Israel celebrates 70 years since its declaration of independence.

"We're looking at coming. If I can, I will," Trump said. "I may. We will be talking about that and other things.

"Israel is very special to me. Special country, special people, and I look forward to being there, and I'm very proud of that decision," he added.

The trip would be political catnip for Trump and Netanyahu, appealing to supporters who see good U.S.-Israel ties as a strategic and even religious imperative. But the trip would also be a major security and diplomatic challenge, one that risks further infuriating Arab allies and scuttling U.S. claims to be an independent broker for peace. Both Israel and the Palestinians claim Jerusalem as their capital. The embassy move prompted deadly protests and 128 states condemned it in a United Nations General Assembly vote in December. Only seven smaller countries aligned themselves with the U.S. and Israel.

The Jerusalem decision has complicated Trump's already ambitious promise to reach the "ultimate deal" between Israelis and Palestinians.

The U.S. accelerated the planned move of its diplomatic headquarters from Tel Aviv to Jerusalem last month, hoping to hold the ceremonial opening on the same day Israel celebrates its 70th anniversary May 14.

Jerusalem's status was long considered a matter to be resolved in final status negotiations but Trump continued to insist Monday his decision has taken the decision off the table. Palestinians are seeking the east of the contested city as the capital of their state.

East Jerusalem has been occupied by Israel since 1967 and the Palestinian leadership has outright rejected a mediating role for the U.S. after the move to recognize Jerusalem as Israel's capital.

Trump said the Palestinians want to return to the bargaining table "very badly", adding "we have a shot" at brokering a peace deal.

U.S. peace proposals are said to be close to conclusion, but have suffered amid Palestinian anger and as Jared Kushner, the president's son-in-law and point man for peace, lost his top-secret security clearance.

Netanyahu thanked Trump for taking action on Jerusalem. "This will be remembered by our people through the ages. Others talked about it. You did it," he said.

He also warned Iran is the U.S.'s and Israel's greatest security challenge.

"Iran has not given up its nuclear ambitions. It came out of this nuclear deal emboldened, enriched. It is practicing aggression everywhere, including on our own borders," Netanyahu said. "Iran must be stopped. That is our common challenge."

Despite Trump and Netanyahu's warmth, their domestic problems were never far away from the surface. Hours before Netanyahu arrived at 1600 Pennsylvania Avenue it was confirmed that an ex-aide agreed to become a state witness in a corruption probe that has imperiled his premiership. The Israeli leader has embraced the Trumpian tactic of denouncing corruption allegations as "fake news," the same term Trump has used to describe his campaign team's alleged collusion with Russia during the 2016 U.S. elections. Several of Trump's campaign aides are already facing charges or have pled guilty to lying to FBI investigators.