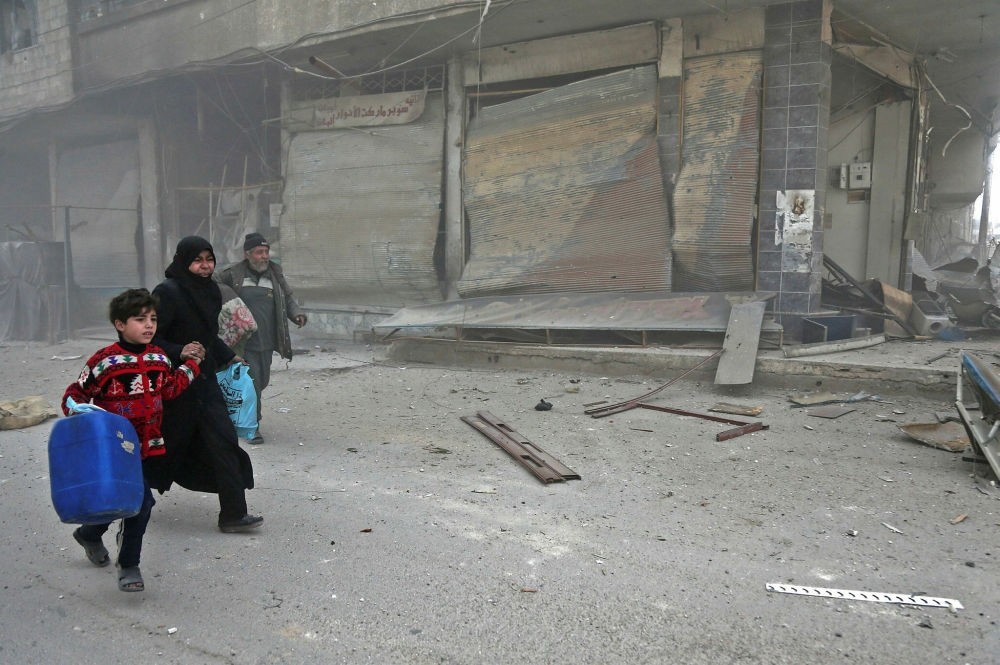 Syrians run for cover in Hamouria during Syrian regime shelling on opposition-held areas in Eastern Ghouta on the outskirts of the capital Damascus, March 6.
by Compiled from Wire Services Mar 08, 2018 12:00 am

The Syrian regime intensifies the Eastern Ghouta assault in a bid to cut the opposition enclave in half, amid the U.N. accusations the regime was orchestrating an ‘apocalypse'

Syria's regime sent reinforcements to Eastern Ghouta yesterday, tightening the noose around the shrinking opposition enclave hours before a top-level U.N. meeting on the escalating violence. The blistering onslaught has prompted outrage against the regime, with the United Nations' human rights chief saying the government was orchestrating an "apocalypse" in Syria.

"This month, it is Eastern Ghouta which is, in the words of the Secretary General, hell on earth; next month or the month after, it will be somewhere else where people face an apocalypse, an apocalypse intended, planned and executed by individuals within the government, apparently with the full backing of some of their foreign supporters," U.N. human rights chief Zeid Ra'ad Al Hussein said.

Eastern Ghouta's roughly 400,000 residents have lived under government siege since 2013, facing severe shortages of food and medicines even before the latest offensive began. Forty-six aid trucks entered the area on Monday for the first time since the offensive, but had to cut short their deliveries and leave due to heavy bombardment. Nearly half of the food aid could not be delivered, and Syrian authorities removed some medical and health supplies from the trucks, the U.N. said.

United Nations Secretary-General Antonio Guterres on Tuesday voiced concern about attacks in Eastern Ghouta, which "reportedly claimed the lives of more than 100 people" on Monday alone, as well as reports of shelling of Damascus.

Linda Tom, spokesperson for the U.N.'s humanitarian coordination office OCHA in Syria, said the aid would aim to reach 70,000 people in Douma and would include medical supplies not allowed in Monday's delivery.

"The regime is preparing to continue its offensive hoping for new advances in the area," Rami Abdel Rahman, head of the Observatory, told dpa.

The Britain-based war monitor said the reinforcements were deployed to two main battlefronts on the western side of the enclave, including the town of Harasta. Regime troops were within firing range of the key towns of Mesraba and Beit Sawa and had taken up positions at the edges of Jisreen and Hammuriyeh. Capturing Mesraba would divide Eastern Ghouta in two after days of a ground offensive that the Observatory says has already seen regime forces capture nearly half of the territory.

Three civilians, including one child, were killed in heavy air strikes on Jisreen yesterday, the Observatory said, according to AFP. That brought the toll in more than two weeks of bombing to 810 civilians, including 179 children. Syria's state television yesterday morning showed a live broadcast of farmland adjacent to Mesraba, with columns of smoke emerging from the town's skyline.

The Syrian regime assault on the densely populated area on the outskirts of Damascus, which began more than two weeks ago, has become one of the fiercest campaigns of the war now entering its eighth year.