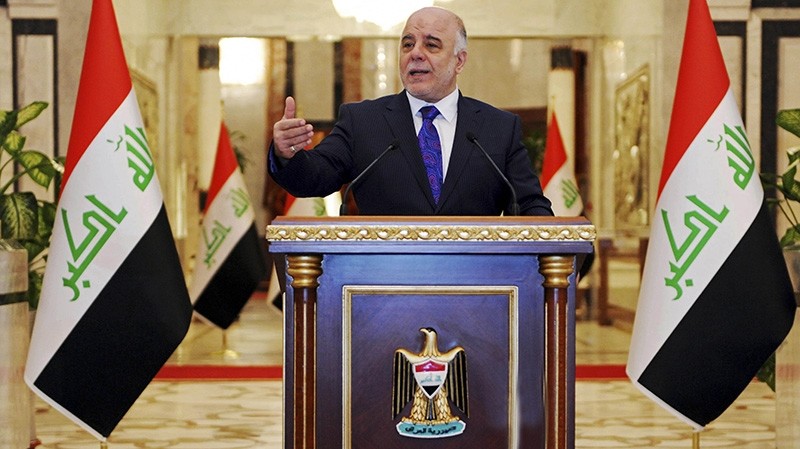 Iraqi premier-designate Haider al-Abadi speaks at his first press conference since accepting the nomination to be Iraqu2019s next prime minister, in Baghdad, Iraq, Monday, Aug. 25, 2014. (AP Photo)
by Daily Sabah with AA Mar 09, 2018 12:00 am

A monthslong ban on international flights into and out of northern Iraq's Kurdish Regional Government (KRG) will be lifted before the upcoming Nevruz spring festival on March 21, Iraqi Prime Minister Haider al-Abadi has reportedly said.

According to a Friday statement released by the office of Barham Salih, head of the Kurdish Regional Government's Democracy and Justice Coalition, Abadi made the assertion in a recent phone conversation with Salih.

"The international flight ban that has remained in place since Sept. 29 of last year at the Erbil and Sulaymaniyah airports will be lifted sometime before Nevruz on March 21," the statement read, citing Abadi.

Baghdad imposed the flight ban late last year in response to an unconstitutional poll on regional independence carried out by the Erbil-based KRG. The ban was extended in December for two months and was to run until Feb. 28.

In late February, a press officer for the Irbil International Airport told Anadolu Agency the flight ban had been extended another three months to the end of May. A spokesman for Abadi's office later confirmed the report.

The week's statement adds that Abadi said that the central government would pay the salaries of education and health ministry employees based in the Kurdish region "as soon as possible."

Speaking to reporters on Tuesday, the Iraqi prime minister appeared to confirm that the salaries of civil servants based in the region would be paid -- and the flight ban lifted -- "soon."

The central government has not paid the salaries of the Kurdish region's civil servants since 2014, accusing the Erbil-based KRG of exporting oil without its consent.