Tensions between Fatah, Hamas escalate after explosion in Gaza 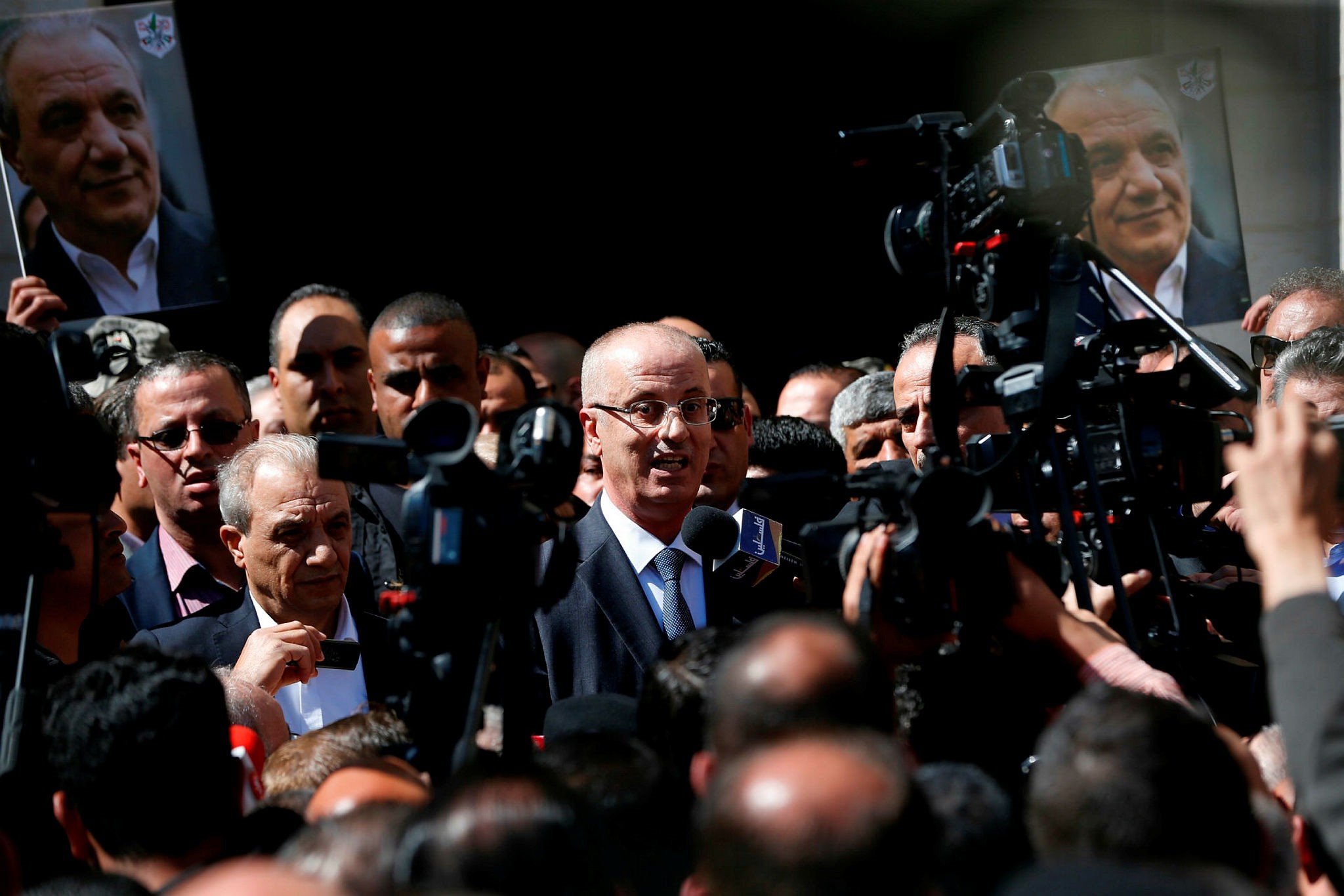 Palestinian Prime Minister Rami Hamdallah (C) addresses the media upon his arrival in the West Bank town of Ramallah following his return from the Gaza Strip where an explosion targeted his convoy, March 13.
by Compiled from Wire Services Mar 14, 2018 12:00 am

An explosion struck the convoy of the Palestinian prime minister yesterday as he was making a rare visit to Gaza, in what his Fatah party called an assassination attempt it blamed on the Hamas resistance group.

The explosion went off shortly after the convoy entered Gaza through the Erez crossing with Israel. Palestinian Prime Minister Rami Hamdallah was unharmed. But Fatah quickly held Gaza's Hamas rulers responsible for the "cowardly attack" on the convoy, further escalating tensions between the bitter rival factions. Hamdallah, who operated in the West Bank, arrived in Hamas-run Gaza to inaugurate the sewage plant and said there that the attack will "not deter from seeking to end the bitter split. We will still come to Gaza." The plant was envisioned in 2007 after overburdened sewage reservoirs collapsed, killing five villagers.

Hamas has condemned the Gaza explosion and called yesterday's blast a "crime" and said it was an attempt to "hurt efforts to achieve unity and reconciliation." The Hamas interior ministry said security forces were investigating the incident. It said it would not derail Hamdallah's visit, which comes as the reconciliation agreement between Hamas and Abbas's Fatah party falters.

"The bombing attack is suspicious and aims to sabotage reconciliation talks," Hamas spokesperson Hazem Qasem said in a statement, according to Anadolu Agency (AA). "The only side benefiting from this incident is the one who wants the Palestinian division to continue," he added.

Turkey yesterday condemned the attack against the convoy of Palestinian premier in blockaded Gaza Strip. "We strongly condemn the armed attack against the convoy of Palestinian Prime Minister Hamdallah in Gaza today," the Turkish Foreign Ministry said in a statement. "We wish that our Palestinian brothers act in unity and solidarity against this provocative attack," it added. Turkey also wished a speedy recovery for the wounded and expected the perpetrators of the attack to be identified as soon as possible.

The rival factions have been trying to reconcile since 2007 when Hamas seized control of Gaza from Fatah forces and have suffered several setbacks in their efforts since. The takeover left the Palestinians with two rival governments, Hamas in Gaza and the Western-backed Palestinian Authority governing autonomous enclaves in the Israeli-occupied West Bank.

In November, Hamas handed over control of Gaza's border crossings to the Palestinian Authority. It was the first tangible concession in years of Egyptian-brokered reconciliation talks. But negotiations have bogged down since then.

As part of peace efforts, Hamas declared its new program last May, disavowing itself from the Muslim Brotherhood, distancing itself from aims of destroying Israel and accepting the 1967 borders of the Palestinian state without referring to Israel's legitimate statehood. Hamas also signaled its acceptance of a two-state solution through an alliance with Abbas' party. There were several reasons for the release of Hamas's new program; namely, its attempt to better relations with Egypt to combat the Daesh threat in north Sinai and to decrease internal pressure coming from Abbas and the international one coming from Egypt and Israel.

Hamdallah's visit comes amid a time of crisis in Gaza, where the economy is devastated. In addition, the bombing occurred ahead of the White House Gaza conference. The Palestinians were enraged by President Donald Trump's decision to break with longstanding U.S. policy by recognizing Jerusalem as Israel's capital. Israel has maintained a blockade of Gaza since 2007, which it says is necessary to isolate Hamas, while Egypt has also kept its border with the enclave largely closed.