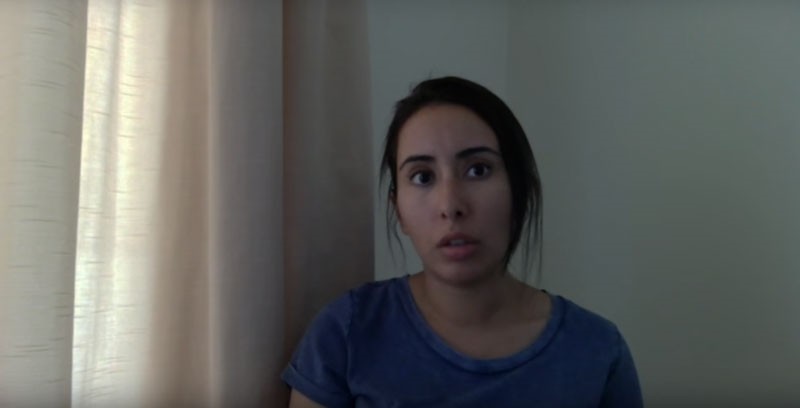 Screengrab from Youtube video uploaded by Escape From Dubai.
by Daily Sabah with Wires Mar 16, 2018 12:00 am

Dubai "princess" Sheikah Latifa Mohammed Al Maktoum has reportedly gone missing off the coast of Goa, India, and a lengthy YouTube video in which she says it "could be my last" could be the evidence.

The woman in the video, who claims to be the daughter of Dubai ruler Sheikh Mohammed bin Rashid Al Maktoum says she has fled Dubai with American Jean-Pierre Herve Jaubert to seek a new life abroad. However, she also says that she believes her life is in danger as evident in her words:

"If you are watching this, I'm either dead or in a very very bad situation."

Latifa reportedly instructed her lawyer to upload the video to YouTube in the case she disappeared.

In a bid to escape the control of her father Sheikh Mohammed, Latifa says she just wants to have the freedom to make her own choices and travel.

She says she is the 'middle' Latifa and one of the 30 children of Sheikh Mohammed in an effort to verify her identity. She then goes on to describe the reality of life as a female member of the Emirati royal family, saying she doesn't have the freedom a citizen living in a civilized country would have, such as driving and not having a curfew.

"I am very restricted, and cannot even go to another emirate without permission. I have not left Dubai since 2000," she adds.

In the video, she also details her imprisonment in 2002 for previously trying to escape the country and says she was detained for three years. Calling her father a criminal, she says he would "do anything to preserve his reputation," including torture and killing.

The Emirati princess is understood to have been hiding on a U.S.-registered yacht near Goa, off the coast of southern India before all contact was lost.

India's NDTV reported that the last known contact to Latifa was on Sunday, March 4 at around 4:30 p.m. which was a WhatsApp conservation between her and her U.K.-based representative Radha Stirling.

In the Whatsapp conversation, Latifa alleges that "there are men outside" firing at her and Jaubert, and desperately asks for help from Stirling. The last message is sent by Stirling, asking Latifa to record the gunshots. Stirling gets no reply back.

U.K.-based NGO "Detained in Dubai," who shared the video, sent missing person notices to agencies across the U.S., U.K. and India, but says it has not heard anything from India yet. Scotland Yard said it received the report on March 5.

NDTV reported that Latifa first contacted Detained in Dubai, a legal firm helping people having problems in the UAE or abroad, on Feb. 26, claiming that she had been tortured after trying to help her older sister who had also run away, and was seeking its help.

Jaubert told the agency that they were planning to fly to the U.S. on March 5 but didn't know how the Indian government would react. He said they feared they would alert the UAE of their whereabouts.