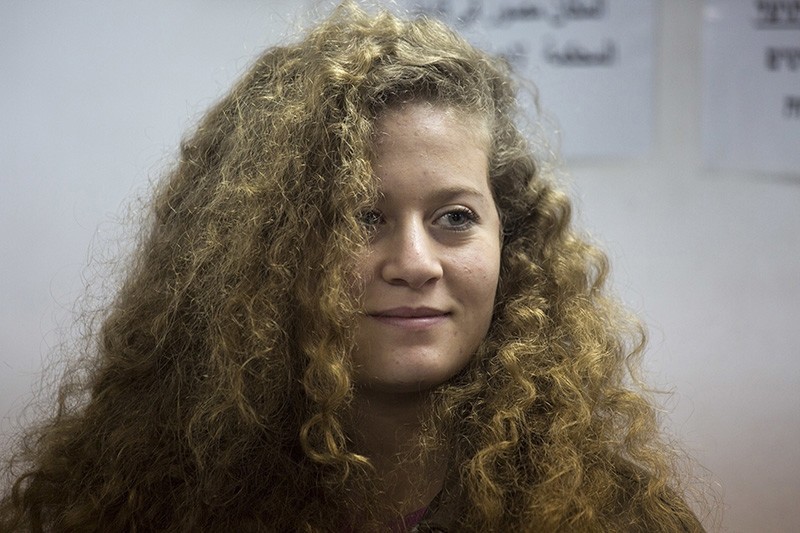 In this Feb. 13, 2018 file photo, Palestinian protest icon Ahed Tamimi is in a courtroom at the Ofer military prison near Jerusalem. (AP Photo)
by Daily Sabah with Agencies Mar 20, 2018 12:00 am

The father of Palestinian teenager Ahed Tamimi says he has visited his daughter and wife in an Israeli prison ahead of their trial, which will be held behind closed doors after the teen's appeal for an open trial was denied.

Bassem Tamimi says he spoke to his wife and daughter for 45 minutes on Monday, using a telephone as they sat on the other side of a window, for the first time since they were both arrested in December.

Tamimi said Tuesday they are both in good spirits. His says Ahed, who turned 17 behind bars, spends her time doing school work and reading, focusing on English studies.

The military appeals court rejected a request to hold the proceedings in open court, claiming the closed trial "expresses the best interests of the minor."

Speaking to Anadolu Agency before the trial was set to begin at the Ofer military court, Tamimi said Israel was "deeply disturbed" by the international media attention his daughter had continued to draw.

Ahed Tamimi was arrested after a video went viral online of her slapping and kicking two Israeli soldiers outside her Ramallah home. When her mother went to the authorities seeking information about her arrested daughter, she too was detained. Both have been charged with incitement and other crimes in a case that has gained international attention.

Ahed's cousin, Nur, who can also be seen in the video, was also later detained.

According to Tamimi, the last time his daughter and wife appeared in court was on Feb. 13. He said Israel, fearing the media attention the case was generating, had already postponed two separate court hearings.

"These trials are a farce anyway; you cannot expect them to provide any justice," he said.

"They [the Israeli authorities] have been embarrassed by all the media attention," he added, "hence their decision to close the trial to media."

She also met Turkish President Recep Tayyip Erdoğan, who had been serving as prime minister at the time.