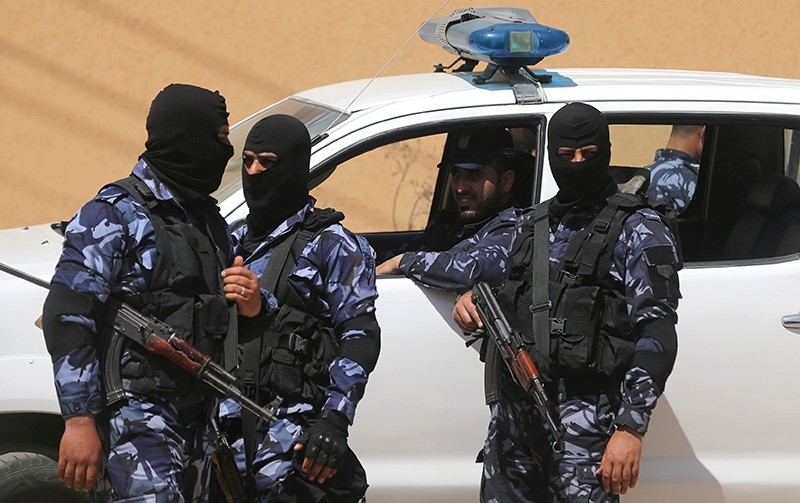 Palestinian security forces loyal to Hamas take up positions during an operation to arrest the main suspect in an assassination attempt against Palestinian Prime Minister Rami Hamdallah, in the central Gaza Strip March 22, 2018. (Reuters Photo)
by Daily Sabah with Agencies Mar 22, 2018 12:00 am

The prime suspect in a Jan. 13 assassination attempt on Palestine's Prime Minister Rami Hamdallah was killed Thursday in an exchange of fire with Hamas-run security forces in the central Gaza Strip, according to Gaza's Interior Ministry.

In a statement, the ministry said two security personnel -- along with a second suspect -- had been killed in the exchange.

"The prime suspect, Anas Abu Khoussa, was killed in the exchange, while an accomplice, Abdul-Hadi al-Ashhab, succumbed to injuries after being hospitalized," the statement read, adding that a third accomplice had since been arrested.

The statement went on to say that two members of Gaza's Hamas-run security services -- Ziad al-Hawajri and Hammad Abu Sweirih -- had also been killed.

On Wednesday evening, the Interior Ministry identified Abu Khoussa as the main suspect and published his picture. The ministry said it would also launch legal action against accomplices in the attack.

Hamdallah and Palestinian security chief Majid Faraj's convoy was attacked by a roadside bomb in Gaza on March 13. They were uninjured.

Palestine's President Mahmoud Abbas on Monday blamed Hamas for the explosion. His remarks threatened reconciliation efforts to end a decade-old rift between his Fatah faction and the Hamas group that is dominant in Gaza.

Hamas had declared a $5,000 reward for anyone giving information about the suspect's whereabouts. It provided no immediate details on his alleged motive or of an affiliation to any militant group.

Abbas, who is based in the Israeli-occupied West Bank, has offered no evidence of the involvement of Hamas in the attempt against Hamdallah's life. But he said he did not trust Hamas to investigate the incident honestly and that there had been "zero" progress in the Egyptian-brokered reconciliation.

Hamas seized the Gaza Strip from forces loyal to Fatah in 2007.