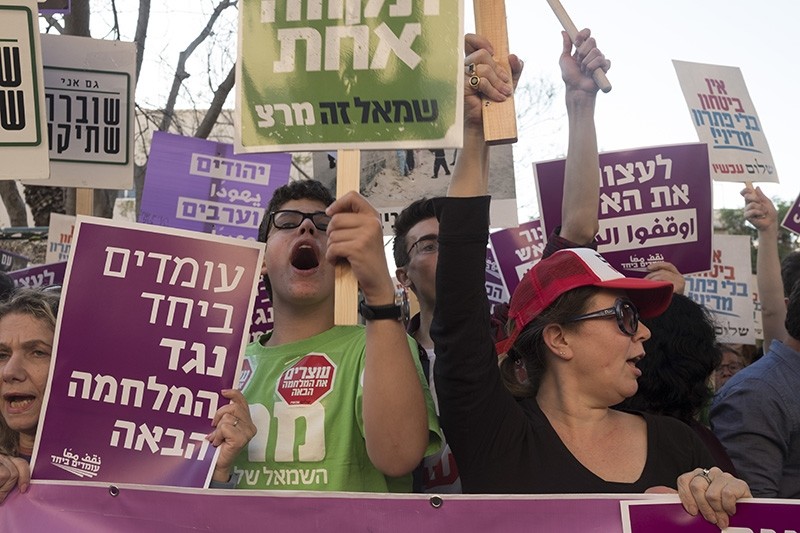 Hundreds of people in the Israeli capital Tel Aviv on Sunday protested Israeli forces' violence against Palestinian civilians last Friday, according to Israeli radio, as violence on the Gaza border continues.

The mostly leftist Israeli protesters chanted slogans against the Israeli army and called for an end to the violence on Palestinian civilians as well as a political solution and resumption of the peace process.

Meanwhile, 11 more Palestinians were injured by Israeli gunfire Sunday near the border between Israel and the Gaza Strip, according to the Palestinian Health Ministry.

On Saturday, Tamar Zandberg, head of the left-wing Meretz party, called on Israeli authorities to open an investigation into the violence that broke out along the Gaza border fence.

On Friday, tens of thousands of Palestinians converged on the Gaza Strip's roughly 45-kilometer (28-mile) -long eastern border with Israel to reaffirm their right to return to their ancestral homes in historical Palestine.

Ahead of the mass demonstrations, Israel had deployed thousands of troops along the border. Dubbed the "Great March of Return," the protests also intended to pressure Israel to lift its more than decadelong blockade of Gaza.

The rallies were endorsed by virtually all Palestinian political factions, which repeatedly stressed the event's peaceful nature.

Land Day is an annual Palestinian commemoration of six Arab Israeli citizens killed by Israeli forces in 1976, during demonstrations against government land confiscations in northern Israel.