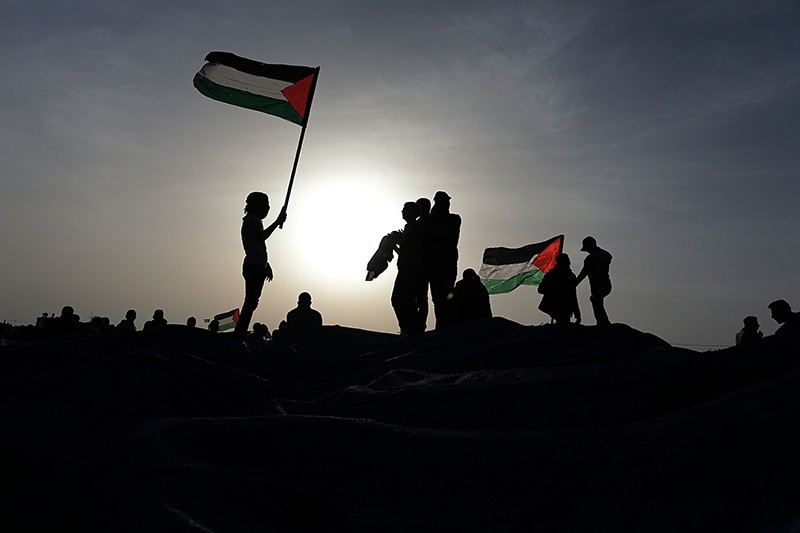 Protesters wave Palestinian flags during clashes with Israeli troops near the border with Israel in the east Khan Yonis town southern Gaza Strip on, 04 April 2018. (EPA Photo)
by Associated Press Apr 06, 2018 12:00 am

Israel and Hamas geared up Friday for another showdown on the Gaza-Israel border, amid concerns about renewed bloodshed after more than a dozen Palestinians were killed and hundreds injured by Israeli fire in a mass protest last week.

Friday's march is the second in what Gaza's Hamas rulers said would be several weeks of protests against a decade-old border blockade of the territory.

Activists plan to burn large numbers of tires Friday, in hopes that clouds of black smoke will block the view of Israeli snipers deployed on the other side of the border fence.

Israel has accused Hamas of trying to carry out border attacks under the cover of large protests and said it will prevent a breach of the fence at all costs.

Last Friday, thousands of Gaza residents participated in a mass demonstration, many gathering in five tent encampments that had been set up from north to south along the narrow coastal strip's border with Israel, each at a distance of about several hundred meters from the fence. Smaller groups, mostly young men, rushed forward, throwing stones, hurling firebombs or burning tires and drawing Israeli fire.

In all, 22 Palestinians were killed in Gaza over the past week, among them 16 involved in last Friday's protests, according to Gaza health officials. This includes a 30-year-old who died on Friday of injuries sustained last week, the officials said.

The six other deaths included three gunmen killed in what Israel said were attempts to attack the border and three men who were struck by Israeli tank fire.

Last week's turnout was apparently driven by the organizational prowess of Hamas as well as the growing desperation of Gaza residents who live in what has been described as the world's largest open-air prison.

The crowd size was seen as a test for Hamas, a militant group that seized the territory in 2007 from its political rival, Palestinian President Mahmoud Abbas.

Ahead of Friday's march, Hamas announced it would pay compensation to families of those killed or injured, ranging from $200 to $500 per injury and $3,000 per death.

Late Thursday, activists urged residents over loudspeakers mounted on vans touring the streets to show up for what they called the "Friday of Tires."

The idea of mass protests was initially floated by social media activists, but was later co-opted by Hamas, with the backing of smaller militant factions.

For Hamas, it's perhaps the last chance to break a border blockade enforced by Israel and Egypt since 2007, without having to succumb to demands that it disarm.

The blockade has made it increasingly difficult for Hamas to govern. It has also devastated Gaza's economy, made it virtually impossible for people to enter and exit the territory and left residents with just a few hours of electricity a day.

Hamas leaders billed the final protest, set for May 15, as the "Great March of Return" of Palestinian refugees and their descendants, implying they would try to enter Israel. But they stopped short of specifically threatening a mass breach of the border fence.

Israel has warned that it will not permit a breach of the fence and said it has a right to defend its sovereign border.

Military officials have said Hamas has used the protests as a cover for damaging the fence, planting explosives and, in one incident, opening fire on soldiers.

Israel argues that Hamas could have ended the suffering of Gaza's 2 million people by disarming and renouncing violence.

Hamas has refused to give up its weapons — even at the cost of derailing talks on getting Abbas to assume the burden of governing Gaza, seen by Israel and Egypt as a prerequisite for opening Gaza's borders.