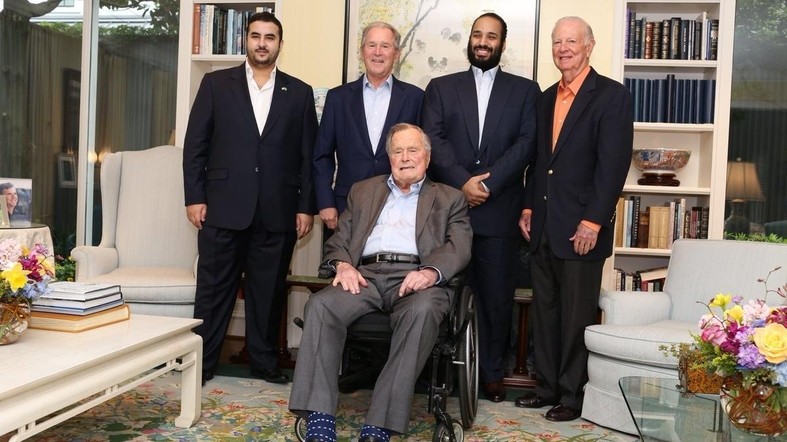 Bush on Sunday tweeted a photo of him with his son, Crown Prince Salman, Saudi Prince Khalid bin Salman and former U.S. Secretary of State Jim Baker, and said the meeting was "a wonderful chance to celebrate the long-standing friendship between our two nations."

As the Saudi prince tries to reshape his kingdom's austere image, the controversy over Saudi Arabia's indirect involvement in the Sept. 11 attacks, which took place during the junior Bush's presidency and resulted in a U.S. invasion in Iraq, has resurfaced recently due to a lawsuit in New York.

On March 28, U.S. District Judge George Daniels in Manhattan said the families of 9/11 victims' allegations "narrowly articulate a reasonable basis" for him to assert jurisdiction over Saudi Arabia under the Justice Against Sponsors of Terrorism Act (JASTA), a 2016 federal law.

The Saudi government has long denied involvement in the attacks in which hijacked airplanes crashed into New York's World Trade Center, the Pentagon outside Washington, D.C., and a Pennsylvania field. Nearly 3,000 people died.

However, Daniels said the plaintiffs could try to prove that Saudi Arabia was liable for the alleged activities of Fahad al Thumairy, an imam at the King Fahad Mosque in Culver City, California, and Omar al Bayoumi, said to be an intelligence officer.

They were accused of helping two hijackers acclimate themselves to the United States and begin preparing for the attacks.

Fifteen of the 19 attackers were Saudis. The U.S. investigated some Saudi diplomats and others with Saudi government ties who knew hijackers after they arrived in the U.S., according to now-declassified documents.

The 9/11 Commission report found "no evidence that the Saudi government as an institution or senior Saudi officials individually funded" the attacks al-Qaida masterminded, but the commission also noted "the likelihood" that Saudi-government-sponsored charities did.

Former senator Bob Graham, who co-chaired the 9/11 congressional inquiry, said in April 2016 that the Saudis were involved in the attacks.

"The Saudis have known what they did in 9/11, and they knew that we knew what they did, at least at the highest levels of the U.S. government," Graham told CNN's Michael Smerconish.

In February 2016, Zacarias Moussaoui, dubbed the 20th hijacker, told U.S. lawyers that members of the Saudi royal family donated millions of dollars to Al-Qaeda in the 1990s.