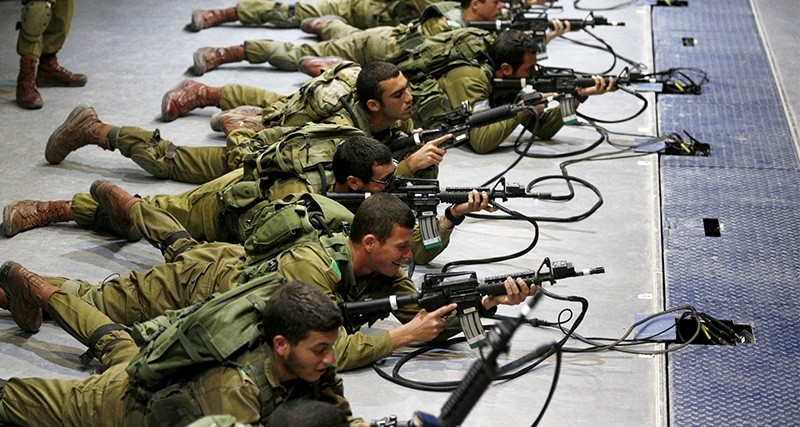 Israeli soldiers respond with laser-firing rifles to a simulated Palestinian crowd on an interactive screen. (Reuters Photo)
by Daily Sabah with AFP Apr 10, 2018 12:00 am

The video comes at a highly sensitive time for Israel's military, which has faced mounting criticism over its use of live fire on the Gaza Strip border, where 31 Palestinians have been killed since late March as mass protests led to clashes. Israel's military said the incident in the video "apparently" dated back several months, adding that it "will be thoroughly investigated." Senior Palestinian official Hanan Ashrawi said the video showed what Palestinians have long alleged regarding soldiers' actions on the Gaza border, "but nobody has been listening."

The shooting in the video appears to take place along Gaza's border with Israel.

Voices can be heard discussing opening fire on what seems to be Palestinians posing no immediate threat near the fence. A shooter then appears to open fire on one, knocking the person to the ground. "Wow. What a video! Yes! That son of a b----," one of the voices behind the camera says in Hebrew.

Israeli Public Security Minister Gilad Erdan downplayed the actions of those in the video that began to spread widely on Monday night. "We are going overboard with this video," said Erdan, from Prime Minister Benjamin Netanyahu's Likud party. "It doesn't show gunfire at everyone, but at a terrorist who approaches the barrier in an unauthorized zone coming from an area controlled by Hamas terrorists," he told public radio. "I am convinced that everything is OK," he added, while also speaking of a "human reaction" by the soldiers confronted with a "tense situation."

Education Minister Naftali Bennett of the far-right Jewish Home party also justified the behavior depicted in the video. "Judging soldiers because they are not expressing themselves elegantly while they are defending our borders is not serious," Bennett told army radio.

It was not possible to determine whether the person shot in the video died. Israeli newspaper Yediot Ahronot reported that the video was recorded in December.

"We have been complaining about this, but unfortunately nobody believes it unless an Israeli source documents it," Ashrawi told Agence France-Presse (AFP). "The issue of sniper fire is not something new at all, but it is time for the world to see and to believe what we have been saying all along."

Mass protests along the Gaza border beginning on March 30 have led to clashes in which Israeli forces have killed 31 Palestinians and wounded hundreds of others. There have been no Israeli casualties.

Israel has faced criticism over its use of live fire, while the European Union and U.N. Secretary-General Antonio Guterres have called for an independent investigation.

Palestinians say protesters are being shot while posing no threat to soldiers.

For Israelis and Palestinians, the video was a reminder of another one from March 2016 that showed an Israeli soldier shooting dead a prone Palestinian assailant.

Caught on video by a human rights group and spread widely online, it showed the 21-year-old Palestinian lying wounded on the ground, shot along with another Palestinian after stabbing and wounding a soldier, according to the army.

Some 11 minutes after the initial shooting, Israeli soldier Elor Azaria shot him in the head without any apparent provocation.

Azaria was convicted of manslaughter after a trial that captivated Israel and highlighted deep divisions in public opinion between those who denounce the shooting and others who say it was justified.

Top military brass strongly denounced Azaria's actions, but right-wing politicians, including Netanyahu, called for him to be pardoned.

Azaria was initially sentenced to 18 months in prison, but his sentence was later reduced to nine months.
Last Update: Apr 10, 2018 4:54 pm
RELATED TOPICS